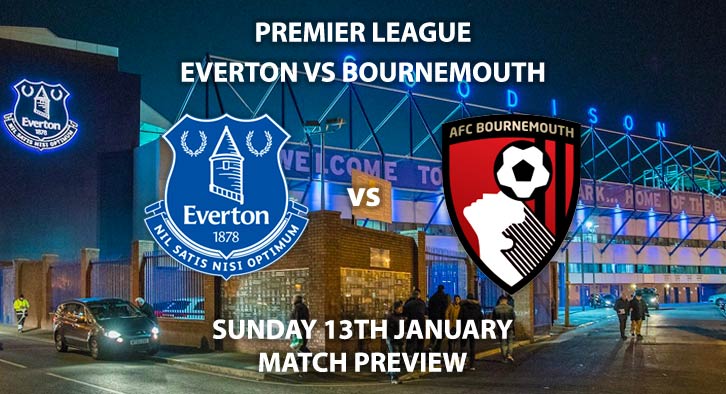 Both teams are occupying midtable positions in the league standings. They also share similar form. Everton have lost four of their last five matches whilst Bournemouth have lost three, drawn one and won one.

Everton are priced at 3/4 to win this match by SkyBet. The toffees have struggled for consistency during the season and enter this match on the back of two 1-0 losses in the league. Their forward line has been rather clinical this season however with both Richarlison and Gylfi Sigurdsson leading by example. The Brazilian forward has nine goals this season whilst the Icelandic midfielder has eight. Richarlison is a nightmare for any defence with his pace whilst Sigurdsson is a danger from set pieces and you can get odds of 7/2 for both of them to score.

Everton have not kept a clean sheet in their last eight matches. For both teams to score and Everton to win, SkyBet are paying out at odds of 21/10.

Bournemouth are priced at 10/3 to get three points away from home. Bournemouth are to be without new record signing Dominic Solanke who has sustained a thigh injury. In his immediate absence heads will turn to the ever-prolific Callum Wilson. Wilson has scored nine goals so far this season and is priced at 2/1 to score anytime this Sunday.

Their last three matches in all competitions has seen both teams score. Their defence this season would suggest that Everton are likely to find the net as they have conceded 40 goals in 21 games. SkyBet are offering 13/2 for both teams to score and the away side to win.

The referee for this match will be Anthony Taylor. The official is one of the more lenient in the Premier League and has averaged 30 booking points in his 14 league matches.

Everton vs Bournemouth will be televised live in the UK on Sky Sports Football HD with kick off at 14:15 GMT.

Prediction:- Everton 2 – 1 Bournemouth
– The home side are in dire need of a win and the visitors are depleted in numbers.

Remember to keep visiting the tips and preview area for further updates and betting previews including Monday nights game between Manchester City and Wolverhampton Wanderers.