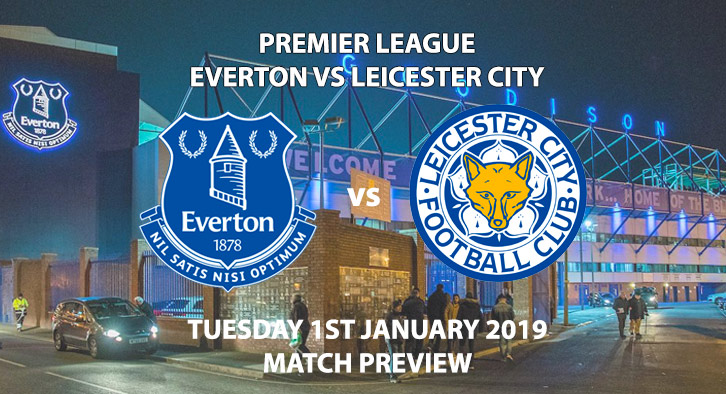 Everton and Leicester City will meet up on New Year’s Day in Premier League action. Both sides are occupying positions in the top half of the table with just one points separating the hosts in 10thand the visitors in 8th.

Everton enter the match on the back of a disappointing result to Brighton. Leicester will also look to make improvements as they lost to Cardiff in their previous outing. Everton are priced at 1/1 to win this match by SkyBet. Despite their poor last result, Everton have become a much stronger outfit this season under Marco Silva.

The Toffee’s invested heavily and it has paid off in the attacking sense. Brazilian Richarlison has been a delight this season and has nine goals to his name. He can score anyway anyhow and is 4/1 to score first. Defensively Everton have struggled. Despite their free-flowing attack, their defence has still not got to grips this campaign. They have conceded 30 goals in 20 games. Five of their last six games has seen both teams score. SkyBet are paying out odds of 3/1 for Everton to win and both teams to score. /

Leicester City are priced at a very tempting 11/4 to come out victorious this Tuesday. Claude Puel’s side have struggled for consistency this season but sit comfortably in the top half. Jamie Vardy and James Maddison have made a fruitful partnership in the Leicester attack that has wielded 11 goals and five assists shared by the two.

Peeling off the last man, Vardy will be a danger and is 15/8 to score anytime. Leicester have lost both of the last two meetings with Everton to a 2-1 score line. SkyBet are paying great odds of 6/1 for the rolls to reverse and Leicester win with both teams scoring.

Everton vs Leicester City will be televised on Sky Sports Premier League HD and kicks off at 12:30.

Odds and markets last updated on Tuesday 1st January 2019 @09:54 GMT. Keep checking back to see if there’s any updates to markets – the time stamp in the previous sentence for when we update tips on this page will be updated.

Remember to keep visiting the tips and preview area for further updates and betting previews around the domestic action over the first of week of the 2019 – Happy New Year to all our readers and followers.