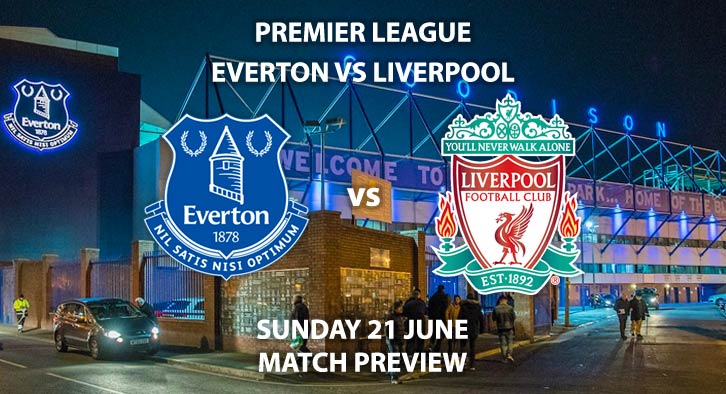 Everton will play host to Liverpool in the Merseyside derby this Sunday evening as the Premier League makes its return.

The Toffees have their work cut out for them upon their return to the pitch with their poor form before the lockdown not helping their case. Meanwhile, Liverpool will look to add to their incredible tally of 27 wins from 29 matches as they are just a couple matches away from their inaugural Premier League title.

Everton are priced at 9/2 to win the match by SkyBet and claim a shock victory against their rivals upon their return. Carlo Ancelotti will be hoping to spoil Liverpool’s party as they cruise towards the championship as they look to make up for their poor season by their standards. They are currently 12th in the league, nine points from Manchester United in fifth.

In attack, Dominic Calvert-Lewin has been in inspired form this season with 13 goals so far. He is priced at 7/4 to score anytime.

Liverpool are priced at 3/5 to beat Everton and get three points closer to their first Premier League crown. Jurgen Klopp’s side have their eyes set on one thing, with no clubs anywhere near them in the league standings. They are just six points from the title, with their only loss of the campaign coming against Watford just before the break.

In attack, Mohamed Salah has been their top goal scorer with 16 goals and six assists. He is priced at 1/1 to score anytime.

Last time these two met in the league, the Reds ran out victors in an incredible 5-2 win at Anfield. Divock Origi scored two as Sadio Mane, Xherdan Shaqiri and Gini Wijnaldum all got on the scoresheet and only 30 booking points were brandished. SkyBet are offering 1/1 for 50+ booking points.

The match will be televised on Sky Sports Main Event HD and kicks off at 19:00.

– The away side will want to ensure they come back with a bang as they aim to close in on their first Premier League title.