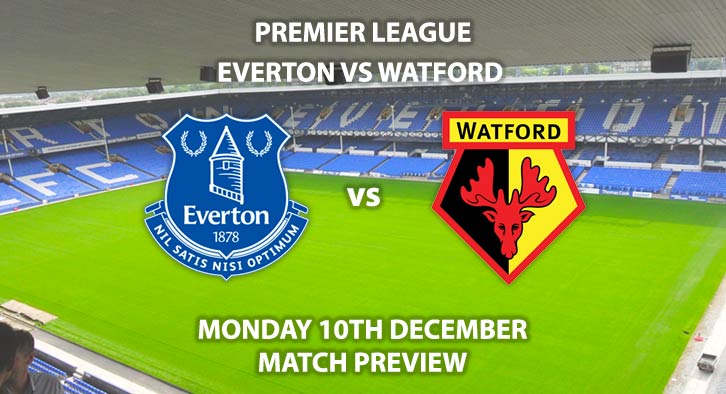 Everton vs Watford is Monday nights Premier League game live on Sky Sports. The home side enter this match not in the greatest form, with a loss against rivals Liverpool and a 1-1 draw with Newcastle in the past week. Meanwhile, things haven’t gone much better for Watford, who are on a three-match loss streak.

Everton are priced at 3/4 by SkyBet to win on Monday night. The Toffees have had a positive campaign so far as they are currently 6thin the league. However, their recent late loss to Liverpool has soured the campaign. Marco Silva will be thankful for both Richarlison and Gylfi Sigurdsson this season, who have had the lion’s share of goals. The Brazilian has scored 7 so far and seems to be justifying his high price tag. He is 4/1 to score first. The Icelandic midfielder has scored 6 goals this season and is a danger from any set piece. He is 7/4 to score anytime.

Defensively, Everton have one of the stronger defences in the league. They have conceded 17 goals in 15 matches, however only 7 goals in 8 home matches. They are 2/1 to win to nil.

Watford are priced at 18/5 to pull off a victory away from home. Despite their fast start to the league, recent form has seen them drop to 11thin the table. Argentinian Roberto Pereyra has been the brightest attacking spark in Watford going forward with five goals this season. However, he hasn’t scored since late October. He is 7/2 to score anytime.

Their last three matches have been tough with Liverpool, Man City and Leicester as opponents, which have all resulted in losses and seven goals conceded. They will struggle to keep the Everton attack quiet but that doesn’t mean they can’t still win. For Watford to win and both teams to score, SkyBet are offering 15/2.

The referee for this match will be Kevin Friend. The official has averaged 42.3 booking points in his 11 Premier League matches.

Everton vs Watford will be televised live in the UK on Sky Sports Premier League HD and kicks off at 20:00.

– Neither side have shown good form of late and are a tough match-up to call on paper.

Odds and markets last updated on Monday 10th December @12:25 GMT. Keep checking back to see if there’s any updates to markets – the time stamp in the previous sentence for when we update tips on this page will be updated.

Remember to keep visiting the tips and preview area for further updates and betting previews around this weeks other European and domestic games.