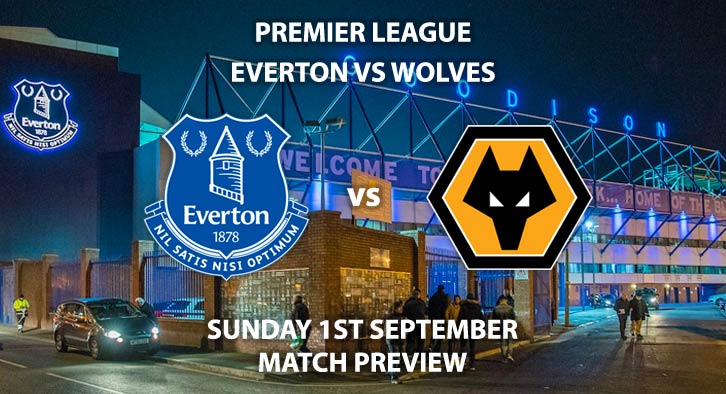 Everton face Wolves on Sunday afternoon at Goodison Park as both sides look to return to winning ways in the Premier League.

Both sides dropped points in the last round of PL fixtures, and are aiming to bounce back this weekend. Marco Silva’s Everton side were beaten 2-0 by Premier League new boys Aston Villa, meanwhile Raul Jimenez’ late penalty for Wolves ensured a share of the spoils against Burnley.

The luxury of Europa League football may come as a hindrance for Nuno Espirito Santo’s side however. Thursday nights Europa League clash with Torino means his side have only 48 hours to prepare for this fixture, which may hand the Toffees a slight advantage.

Everton featured midweek too, in the Carabao cup where they saw off a spirited Lincoln City side, defeating them 4-2 at Sincil Bank. New signing Alex Iwobi netted his first goal in Everton colours in the midweek win and is priced at 9/2 to score anytime on SkyBet.

Many envisage these two sides will be and around the top 6 come the end of the season, so Saturday’s encounter provides the perfect opportunity for either side to set a statement of intent for the remainder of the season.

The last time these two sides met at Goodison Park it was the visitors who ran out comprehensive winners. Wolves won 3-1 that day and opened the scoring through a Ruben Neves penalty. A penalty to be awarded on Saturday is at odds of 13/8 on SkyBet.

Raul Jimenez netted 13 times for Wolves last season and scored in both League encounters with Saturdays opponents Everton too. The Mexican to score anytime on Saturday, and Wolves to win is priced at 4/1 on SkyBet.

Anthony Taylor takes charge of Sundays clash and has already issued 11 yellow cards in 3 appearances this season; just under 4 cards per game. Because of that, I would recommend a maximum of 50+ booking points for this weekend.

Despite Wolves’ Europa League game on Thursday night, I still feel they are more than capable of getting something from the game, but so are Everton. I am predicting a share of the spoils but do expect both sides to find the back of the net. The supporters packed inside Goodison Park as always will act as the ‘twelfth man’ for the Toffees, which could make things uncomfortable for the visitors, but I maintain the belief that both sides will take a point apiece.

Everton vs Wolves will be televised live in the UK on Sky Sports Premier League with kick-off at 14:00 BST.