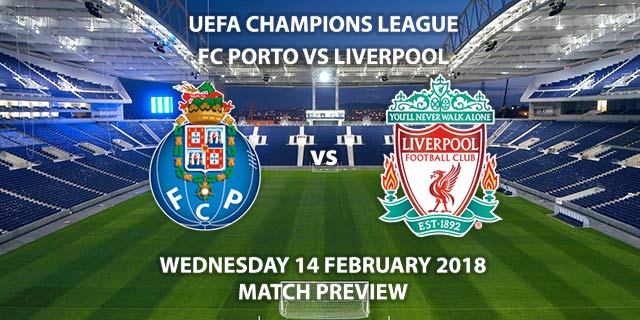 FC Porto vs Liverpool – Liverpool resume their European dream as they take a trip to Portugal where face Porto in the first leg of their Champions League tie.

After successfully winning their group last year, Jurgen Klopp’s men were pitted against one of Portugal’s finest clubs. The Reds had a fantastic weekend; making Manchester United pay for their defeat to Newcastle with a 2-0 victory at Southampton. That win means they’re just two points off United who occupy second. The result also moves them four points clear of Chelsea in fifth, ahead of their Monday night tie with West Brom.

With just one league defeat in their last 18 games, Liverpool appear to be building a strong domestic push. The real test will come in Europe; will we see the exhilarating football played against Manchester City or the woeful defending in their defeat to Swansea? One thing is clear, the stakes are much higher. Unlike most January additions, Klopp has the added bonus of using Virgil van Dijk in the competition.

This is a tie the Reds should get through and the nature of their high pressing, free-flowing football could just take them to another European title. Given that on their day Liverpool can beat just about anyone, favourable draws could see them make a real mark on the biggest stage. The form of Mohamad Salah and Roberto Firmino has been impossible to ignore and coupled with the pace and power of Sadio Mane, they will give any defence in Europe a run for their money.

Porto find themselves top of the Premeira Liga standings, two points ahead of Benfica. Unbeaten in the league, the Dragoes have amassed an impressive 55 points from their 21 games this season. Porto have won their last three games in all competitions, including the semi-final of the Taca de Portugal as they seek domestic glory. The dynamic duo of Moussa Marega and Vincent Aboubakar pose Liverpool the biggest problems, with the pair netting a combined 31 league goals so far this season.

Liverpool have never lost to Porto and have drawn both their only two visits to the Estadio do Gragao. At Anfield, they have won both their games, with their last meeting ending 4-1 back in 2007.

Daniele Orsato has been appointed as the referee for this match. The Italian official, who plies his trade in Serie A, has an average of 4.1 cards per match this season. These 40 yellow cards and one red card across ten matches this campaign.

With Liverpool playing the first leg of this tie away from home, I think getting an away goal could be crucial. Given their good form of late, I think they’ll get a draw, which would set them up nicely to finish the job at Anfield. Porto are by no means a bad side and will run the Reds close, so don’t be surprised to see the Portuguese giants edge this contest.

FC Porto vs Liverpool will be televised in the UK on BT Sport.