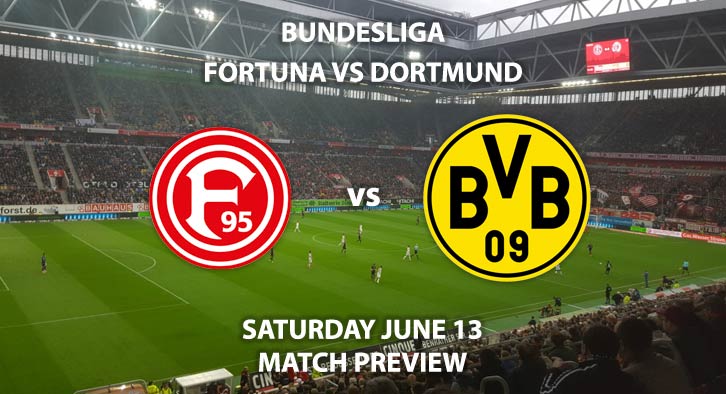 Borussia Dortmund return to Bundesliga action on Saturday afternoon when they travel to face Fortuna Dusseldorf.

Lucien Favre’s side come into Saturday’s clash following a hard-fought victory over Hertha Berlin last Saturday. The only blemish on Dortmund’s record since the Bundesliga’s return was their De Klassiker defeat to fierce rivals Bayern Munich, a result which just about sealed Bayern’s fate as Champions barring a monumental capitulation. Dortmund are seven-points behind the league leaders.

Saturday’s clash is the start of what looks like a tough week for Dusseldorf. They welcome Dortmund before travelling to RB Leipzig on Wednesday night; two clashes against 2nd and 3rd in the division. Uwe Rosler’s side find themselves 16th in the league, truly in the thick of a relegation battle. Dusseldorf have won one of their five encounters since the leagues return.

The meeting in the reverse fixture ended in a 5-0 rout for Dortmund, with Marco Reus and Jadon Sancho both netting twice each. Reus returned to Dortmund training this week and faces a race to be fit for this one. Dortmund have won three of the last four meetings between these two sides. Dusseldorf’s only recent win came back in 2018 where they ran out 2-1 winners.

In three of the last four meetings in this fixture, BTTS has landed. This is priced at 4/6 on SkyBet. Over 3.5 goals has landed in the last three consecutive meetings and is priced at 11/10 to land in this one.

Dortmund have won their last four away matches in the Bundesliga by an aggregate scoreline of 12-2. This includes the 6-1 annihilation of strugglers Paderborn a fortnight ago. SkyBet are offering odds of a Dortmund win-to-nil at 6/4.

Borussia Dortmund’s Mats Hummels has been yellow carded five times in the Bundesliga this season, including twice in his last three appearences. The German is priced at 4/1 on SkyBet to be booked on Saturday.

Meanwhile Dusseldorf’s Kaan Ayhan is second in the yellow card rankings this season with sixteen bookings in twenty-six appearences. He is priced at 6/4 on Bet365 to be carded on Saturday afternoon.

This match will be televised live on BT Sport 1HD with kick-off scheduled to take place at 14:30 BST.