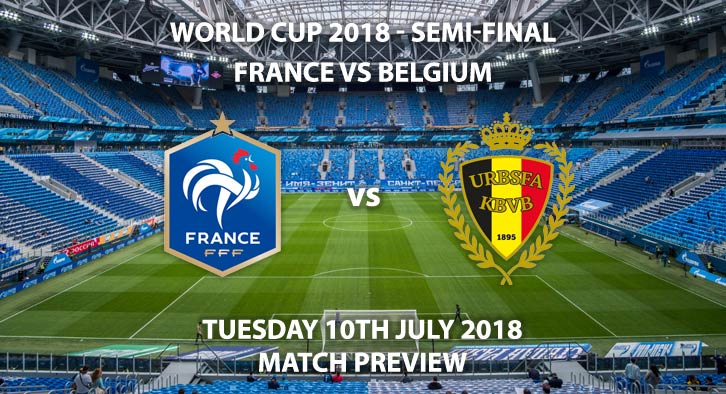 France vs Belgium –  the first semi-final takes place tonight with both sets of players desperate to help their side into the final of the World Cup.

France are in their first World Cup semi-final since 2006. They progressed that night, before famously losing the final to Italy after Zinedine Zidane’s headbutt. This, however, is a much different side to that of ’06. They still have their superstars; Antoine Griezmann took his tally for the tournament to three goals after his long-range strike fumbled through Fernando Muslera’s hands. That goal gave France a two-goal cushion – a lead they never looked like losing. The game management after the Atletico Madrid forward’s 61st-minute strike was that of a team of winners. France have the third-lowest average age in their 23 man squad, at 26, but this performance was one that matched a much more wiley bunch.

Whilst Griezmann, Paul Pogba and Kylian Mbappe will take all the headlines, France’s rearguard deserves some of the limelight too. After leaking three goals against Argentina, it was a much more solid display from two of the world’s most promising centre-backs. Rafael Varane and Samuel Umtiti have struck up a solid partnership, despite their Real Madrid – Barcelona differences at club level. Some may even suggest they are better than Spain’s combination of Sergio Ramos and Gerrard Pique

Belgium claimed their biggest scalp of the tournament with a 2-1 win over Brazil. Roberto Martinez changed the Red Devils’ shape, opting for a 4-3-3 system and deploying Kevin De Bruyne as a false nine. It worked a treat; Brazil’s offensive style often left KDB, Eden Hazard and Romelu Lukaku three on three. Lukaku, in particular, has been sensational during this tournament. He is yet to score since the group stages, however, he has still influenced both Belgium’s games, which was often a criticism in the past. We also saw the best of KDB in this game. It will be interesting to see how Martinez sets up against France, who are a much different team to Brazil.

Andreas Cunha is the referee for this match. The Uruguayan has averaged 4.12 yellow and 0.27 red cards per match in 49 international matches. He’s also awarded 0.22 penalties per match during those games. Therefore, I would advise a maximum booking points total of 40+ for this game.

I fancied Brazil to win the World Cup, but Belgium blew them away with their tactics on Friday night. France will be wary of underestimating them as a result, but will still be confident of getting a result. There is so little to separate these two star-studded teams and I think this one will go all the way.

Keep visiting Tips and Previews ahead of games to get our suggested tips and correct score picks for the remainders tomorrow’s second semi-final. Tips updated at 17:10 GMT on 10th July 2018.