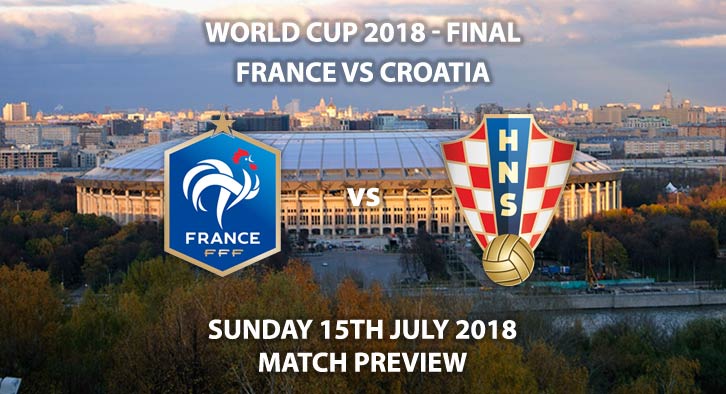 After a month worth of football France vs Croatia is the World Cup final, with both sides desperate to finish the match as world champions.

France secured their place Sunday’s showpiece with a 1-0 win against Belgium. Samuel Umtiti’s first goal of the tournament was enough to secure the win. Despite having the third-youngest squad in the competition, it was a mature display from France. Their backline, of which only Rafael Varane is older than 24, were fantastic. Hugo Lloris in goal put in another fine display, with a few important saves to keep the Red Devils at bay. France have only conceded four goals in this tournament, with three of those strikes coming against Argentina. They have kept four clean sheets, the most in the tournament. It was a very tight game that France just about edged, which has now put them on the brink of their first World Cup triumph since 1998, exactly 20 years ago. This would be their first-ever victory on foreign soil, having lifted their first trophy in Paris.

Croatia once again found a way to win. They are yet to win a knockout-game having played extra-time in each match since the group stages. They needed penalties to get past Denmark and Russia, but broke English hearts in extra-time thanks to Mario Mandzukic. That win only further epitomised Croatia’s desire and resilience, after battling back from being 1-0 down inside five minutes. Luka Modric again ran the show as his bid for the golden ball gathers momentum, whilst Ivan Perisic scored and lead the comeback. The Inter Milan winger was a menace down the left-hand-side, causing England multiple problems with his ability to shift the ball on to either foot. Croatia don’t know when they are beaten; an admirable trait that could be crucial in the final.

Nestor Pitana is the referee for this match. The 43-year-old Argentine official was the man in the middle for France’s 2-0 victory against Uruguay in the quarter-finals, as well as Croatia’s penalty shoot-out victory over Denmark in the round of 16. He has averaged 4.62 yellow cards per game across 87 international matches. Therefore, I would advise a maximum total of 50+ booking points for this game.

Croatia have proved throughout they are stubborn opponents, who will never lie down. France will obviously be huge favourites for the match but will have to be patient to break Croatia down. I’m going to plump for a draw in this game, with France to sneak the win in extra-time, or from 12 yards.

The world cup final between France vs Croatia will be televised live in the UK on both BBC 1 and ITV 1 with kick-off at 16:00 GMT.

Lots of tips for today’s final listed – we have given our NAP and Next Best picks (NB). Back the tips you actually like rather than all, stake what you can afford and don’t go too mad unless you can afford too. Enjoy the final !