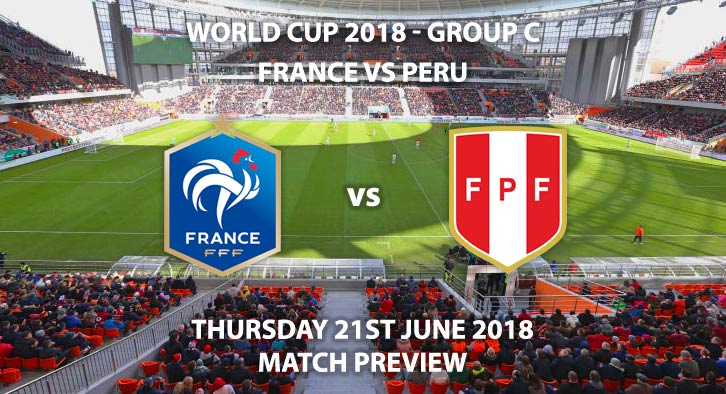 France vs Peru – France need to dispel the critics by convincingly beating Peru and solidifying their spot in the last 16.

Didier Deschamps’ talented team languished to a 2-1 victory over Australia last time out. Many fans and pundits criticised the uninspired performance from one of the tournament favourites. Antonine Griezmann and Paul Pogba both got on the score sheet but offered little else throughout the game.

Les Blues’ squad is littered with star power though, with it surely being a matter of time before it shines. A defence that includes Samuel Umtiti and Raphael Varane of Barcelona and Real Madrid respectively. Midfield options of N’Golo Kante, Pogba, Corentin Tolisso and Blaise Matuidi, or even Thomas Lemar or Steven N’Zonzi. Attackers like Griezmann, Kylian Mbappe, Ousmane Dembele and Nabil Fekir. Astonishing depth. Any neutral wants this squad to click and show us its true ability.

An appetising long shot is Dembele to score, France to win, 11 match corners and 30+ France booking points at a huge 33/1 with SkyBet. A 3-0 France victory is a boosted 12/1, also with SkyBet.

A win would surely see France into the last 16, although mathematically it depends on the Denmark v Australia result. This could be the beginning of a golden generation for France and as such could well be Deschamps last opportunity to achieve with it. Runners-up in their home European Championships in 2016, a similar or better return is demanded at this World Cup.

Peru are France’s obstacle, and will count themselves unfortunate to not get anything from their opening match against Denmark. La Blanquirroja were energetic, bold and adventurous but just couldn’t quite break down the resolute Danish defence in the end.

Key striker Paolo Guerrero lacked match fitness so started on the bench but is expected to lead the line here. Andre Carillo, who spent 2017/18 on loan with Watford, was Peru’s greatest threat. Carillo to score first is a boosted 20/1 with SkyBet.

The magnitude of the 1-0 defeat to Denmark, in their first World Cup fixture for 36 years, cannot be understated. It was billed as an early Group C 2nd place play-off and seems that way. Now, one would expect Peru need all three points against France, and/or Australia to beat Denmark, to realistically challenge.

France will surely have too much for Peru, who’s energy wavered late on against Denmark as space appeared in defence. The quality in the French team will have more control throughout and be able to punish the tiring defenders. These two have faced each other once before, France winning 1-0 in an 1982 friendly. The last South American team to best France at a World Cup was eventual winners Argentina in 1978. Peru are up against it.