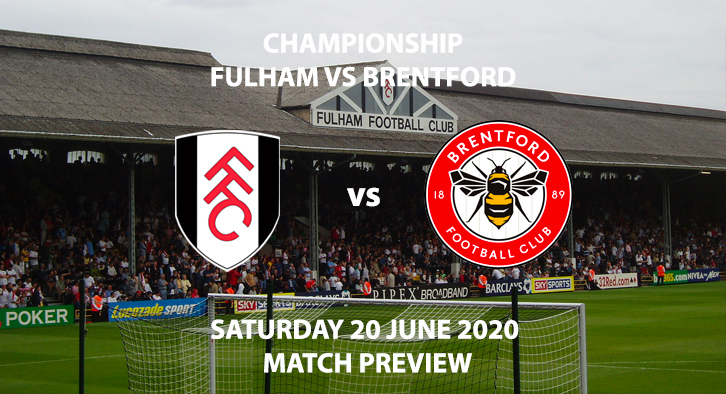 The SkyBet Championship returns this weekend and Fulham are back in action at Craven Cottage on Saturday lunchtime when they host Brentford.

Prior to the seasons stoppage due to the coronavirus, both sides were battling at the top end of the division with all eyes on securing promotion to the Premier League. Fulham sit 3rd, four points and one place ahead of Brentford.

Scott Parker’s side have lost only twice in the Championship this year and hadn’t been beaten in their five meetings before the break. Brentford, similarly, were in fine form and had lost only one of their last eight encounters.

These two sides met back in December and Brentford came away with all three points with a 1-0 win. Bryan Mbueno struck the winner for the Bees, and the Englishman is priced at 2/1 on SkyBet to score anytime.

In the last four meetings in this fixture, both sides have won twice apiece. BTTS has landed in three of the last four encounters and is priced at 8/11 on SkyBet.

The man in charge of this one is James Linnington. The Englishman has appeared 20 times in the Championship so far this season, accumulating a total of 56 yellow cards and 3 red cards. This considered, I would recommend a minimum of 30+ booking points for this fixture. Two yellow cards were issued back in December’s meeting between these two.

Fulham’s Aleksandar Mitrovic is the top scorer in the division with 23 goals. The Serbian failed to score in the two games before the Championship’s stoppage. He is priced 7/5 on SkyBet to score anytime this weekend. Furthermore, the man who sits second in the Championship goalscoring chart, Brentford’s Ollie Watkins, is priced at 13/8 to find the back of the net on Saturday afternoon.

Fulham vs Brentford will be shown live on Sky Sports Main Event, with kick-off scheduled to take place at 12:30PM on Saturday lunchtime.