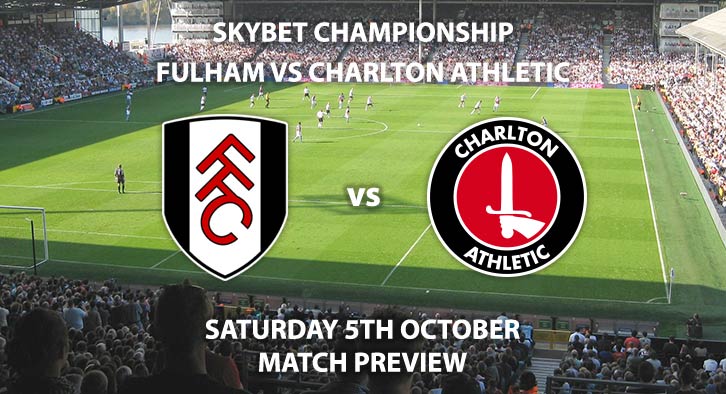 Fulham return to Craven Cottage this weekend as they face Charlton Athletic in the SkyBet Championship on Saturday lunchtime.

Both sides come into this weekend’s clash following contrasting midweek results in the Championship. Fulham were victorious away at Reading, winning 4-1, meanwhile Charlton were defeated 1-0 by league leaders Swansea City at the Valley.

As it’s always the case in the Championship, it is so very tight at both ends of the table already, but it’s the top half which these two sides will be most concerned about. Only four points separate Swansea City who sit top of the pile, and Charlton who find themselves in 8th, with the margin for error as minimal as ever.

Fulham have regained their focus following their slow start to this Championship campaign. Since the opening day defeat to Barnsley, Scott Parkers side are unbeaten in the league, and currently sit 5th, firmly in the thick of a constantly developing play-off battle, with a hatful sides believing this could be their year.

The last time these two sides faced each other was in November 2017, and it was Charlton who were victorious on the day, winning 3-2 in the Football League trophy. However, in the meetings beforehand it was the Cottagers who had the lions share of success, with a ten-match unbeaten run which stretched from 2005-2016. In three of the last four meetings between the two, BTTS has landed therefore this is a market I would recommend for this one.

If Charlton are to get a result this weekend, it looks like they are going to have to do so without their talisman, Lyle Taylor. The 29-year old has been side-lined since the beginning of September with a knee ligament injury and sat out Tuesday night’ defeat to Swansea. It’s a blow for the Addicks, as Taylor made a substantial contribution to their success of last season, scoring 24 goals in 42 appearances, as well as clinching the club’s player of the year award.

The man in charge of this fixture is Keith Stroud. The 50-year old has officiated three Championship matches so far this season, awarding seven yellow cards in the process. This considered, I would recommend a maximum of 40+ booking points for this fixture.

This match will be shown live on Sky Sports Main Event, with kick-off scheduled to take place at 12:30 BST on Saturday lunchtime.