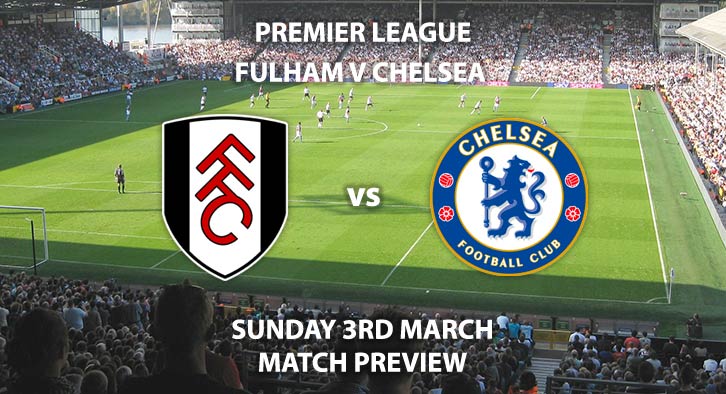 The home side have a new man in the dug-out in the form of Scott Parker after the club sacked Claudio Ranieri during the week. Their four-loss streak seemingly the reasoning for his departure. Meanwhile, Chelsea restored some faith as they beat rivals Tottenham Hotspur 2-0 in a midweek clash.

Fulham are underdogs for this match despite having home advantage. SkyBet have priced them at 5/1 to win. Fulham’s recent 2-0 loss to Southampton proved to be the final match for Claudio Ranieri who left the team ten points deep in the relegation zone. Fulham have scored just once in their last four matches however at home they have been a little more successful. With goals in four of their last five at Craven Cottage, one man hoping to improve the goal scoring record will be Aleksander Mitrovic. The striker has already managed 10 goals this season and is Fulham’s biggest hope of catching up to 17th. He is 9/5 to score anytime.

Chelsea shouldn’t have too many issues with this match and are priced at 8/15. The Blues finally found a stroke of luck as they defeated London rivals Tottenham during the week. A goal from Pedro and a spectacular own goal from Kieran Trippier saw Sarri’s side over the line. Eden Hazard impressed during that match, as he has done so much in recent weeks. The Belgian has 12 goals in the league and is 11/10 to score anytime and add to that tally this Sunday.

The referee for this match will be Graham Scott. The official is one of the most lenient in the whole league, with an average of 26.9 booking points from 16 top-flight matches in charge.

Fulham vs Chelsea will be televised on Sky Sports Premier League and kicks off at 14:05.

– Fulham are having a torrid time and Chelsea still have a point to prove. Can only see this going one way.

Odds and markets last updated on Saturday 2nd March @11:19 GMT. Keep checking back to see if there’s any updates to markets – the time stamp in the previous sentence for when we update tips on this page will be updated.