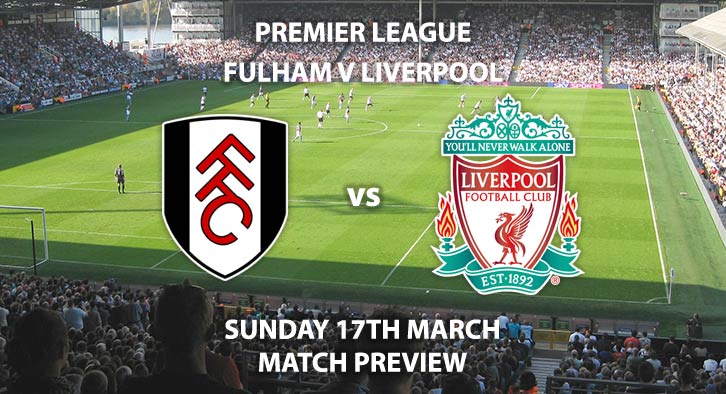 Fulham vs Liverpool: Liverpool will be looking to move back to the top of the Premier League table when they travel to relegation strugglers Fulham.

The Reds capped another memorable night in midweek with a 3-1 win away at Bayern Munich. They were rewarded for that performance with a favourable draw against Porto in quarter-finals. A win in that tie would see last year’s finalists take on Juventus or Ajax for a spot in the final. Sadio Mane was the star of the show, alongside Virgil van Dijk, as the Malian international continues his hot streak of form. The winger has ten goals in his last ten matches and I definitely wouldn’t count against him adding to that against the Cottagers. Jurgen Klopp’s side have recorded five clean sheets in their last five games, in all competitions, which is an impressive record. They are, however, without a win in their last three league trips on the road – their last coming in January away at Brighton.

Fulham are looking dead and buried, with eight games to go. Scott Parker’s side are 13 points adrift of safety and already thinking about the Championship next season. They’ve lost their last six straight games, conceding 15 goals in the process. Their last win was back in January, against Brighton. With such a leaky backline, it would be a shock for them to make it out of this without adding to that poor defensive record, which is already the worst in the division.

Craig Pawson is the referee for this fixture. The Englishman has officiated 33 top-flight matches this season. In that time, he has accumulated an average booking points total of 43.5. Therefore, I would advise a maximum of 50+ total points for this fixture.

Liverpool looked back to their old selves with that win in midweek, which will have boosted their confidence. A resounding victory in West London should do the trick as well. I really can’t see anything but a confident away win, with some goals to boot.

Fulham vs Liverpool will be televised live in the UK on Sky Sports Premier League with kick off at 14:15 GMT.

Odds and markets last updated on Sunday 17th March @10:05 GMT. Keep checking back to see if there’s any updates to markets – the time stamp in the previous sentence for when we update tips on this page will be updated.