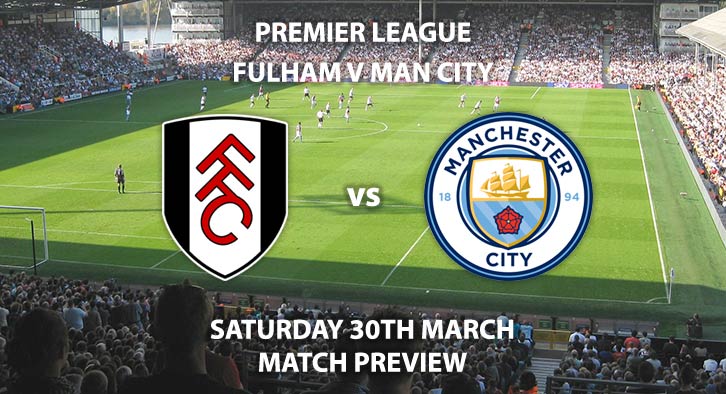 The two sides recent form could not be more different. The hosts have lost seven matches on the bounce whilst Manchester City have won ten matches in a row. When these two met earlier in the season, Pep Guardiola’s side ran out 3-0 victors with goals from Leroy Sane, David Silva and Raheem Sterling.

Fulham are clear underdogs for this match and are priced at a whopping 16/1 to win by SkyBet. The Cottagers have not fared well against the top six teams this season, with 11 losses from 11 matches. Not only have they lost all of them, but they have conceded an average of 2.91 goals in each match. One of the only positives in recent weeks for Fulham fans has been Ryan Babel. The Dutch international has found his feet and scored two goals in his last four matches. Whilst chances will come at a premium against City, he is priced at a respectable 11/2 to score anytime.

Manchester City shouldn’t have any problems with this one and are priced at 1/7 to win. Some of City’s players featured during the international break however none stole the headlines in the same manner of Raheem Sterling. The winger just continues to grow as a player and his eye for goal is second to none. He has 15 goals for the season but is City’s second highest scorer. Sergio Aguero has been electric in recent weeks with eight goals in his last seven matches. SkyBet are offering a very tempting 2/1 for both of them to score anytime.

The referee for this match will be Kevin Friend. The official hasn’t been easy on the teams he’s been in charge of this season and has averaged 38.9 booking points.

Fulham vs Manchester City will be televised on Sky Sports Premier League HD and kicks off at 12:30.

– The away side are looking to pull away from Liverpool at the top of the table and I don’t see Fulham being a possible slip up.

Odds and markets last updated on Sunday 30th March @10:50 GMT. Keep checking back to see if there’s any updates to markets – the time stamp in the previous sentence for when we update tips on this page will be updated.