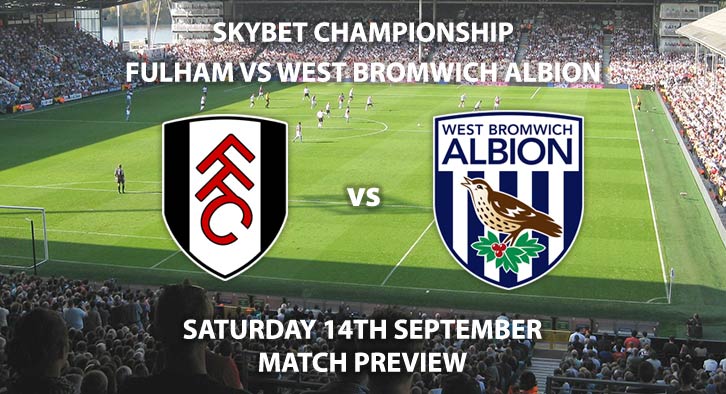 Two of the Championship’s early-season promotion favourites go head to head, with Fulham and West Brom both looking to steal a march on their fellow top-two rival.

Scott Parker’s side have made a decent start to life in the Championship, bouncing back from their opening day defeat to Barnsley. A run of three wins followed, but they took just one point from Nottingham Forest at home and Cardiff City away before the International break. The Cottagers are, understandably, still striving for the form that will make them automatic promotion contenders, as opposed to play-off hopefuls.

Defensively, Fulham still need to improve. Whilst conceding five goals in six games isn’t awful, they still look a little hap-hazardous at the back. In attack, however, they’re devastating. Aleksandar Mitrovic is firing the goals in, with six goals already this term. With Ivan Cavaleiro and Anthony Knockaert supplying him from either flank, the Serbian looks a shoo-in for the Championship golden boot.

West Brom are one of only three teams yet to be beaten in the league this season. Three wins and three draws have followed Slaven Bilic’s opening six games, which is a very healthy return. Grady Diangana has been their star of the season so far. The West Ham loanee has three goals already this season, which earned him an England Under-21 call-up over the International break.

Defensively frailties could once again be the only thing that stops West Brom finishing in the top two. Only Bristol City have conceded more than them, of those teams in the top six, at the moment. Semi Ajayi came in during the summer and whilst his partnership with Kyle Bartley looks promising, there are still moments of uncertainty as the pair get used to playing alongside one another.

The referee for Friday night’s clash is David Webb. The Englishman has racked up an average booking points total of 35, across four Championship matches this season. With that in mind, I would recommend a maximum of 50+ booking points for this fixture.

Both teams have fantastic attacking quality, particularly Fulham. Those attacks should have both in the promotion shake-up come May. However, defensive issues for both will determine whether that is a top-two place, or whether they’ll have to settle for the play-offs. As a result, I’m going for a high-scoring draw.

Fulham vs West Brom will be televised live in the UK on Sky Sports Football with kick off at 12:30 GMT.