Germany U21’s vs Denmark U21’s – Match Preview -Germany will face Denmark at the Under 21 European Championships in Poland this Wednesday. The Germans are heavy favourites entering the match after impressing in their opening fixture with a 2-0 win over the Czech Republic. The Danes will be looking to avenge their previous result, losing to five time winners of the U21 Euros, Italy. A victory will see Germany progress into the next round with ease, they are second favourites to win the tournament, fancy the Germans to go all the way?

The Germans will not take Denmark lightly, with the Danes being the only obstacle in the way of them and the semi-finals. Expect a very similar style of play from the young Germans with a high press and a very potent attack. Germany impressed in their opening fixture where they made easy pickings of Czech Republic, Serge Gnabry being the star performer. The Germans had a total of 24 shots at the Czech’s goal in a dominant performance. Can the Germans make another easy three points this Wednesday?

Denmark will be looking to improve on their previous performance, where they were outclassed by a better Italian side. Germany pose a very similar threat to the Italians with the superior personnel over the Danes, however Niels Frederiksen’s side will have much team spirit entering this match. The bookmakers are fancying Germany to walk all over Denmark however the Danes will be focusing on tightening up at the back with defenders Andreas Maxsø and Patrick Banggaard. Can the Danes pull of a huge shock result in Group C? 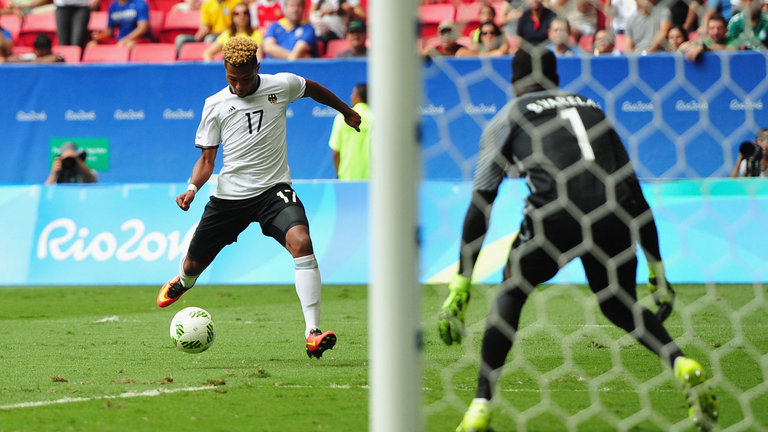 Gnabry has the potential to be one of Germany’s top players Photo Credit: skysports.com

Germany have no players injured or suspended ahead of Wednesdays fixture.

Denmark also have no injuries or suspensions for Wednesdays match.

EFL Striker, Kenneth Zohore, is one of the Danes biggest threats. After not scoring in the opener, can the Cardiff striker bag a goal for his country this time around?