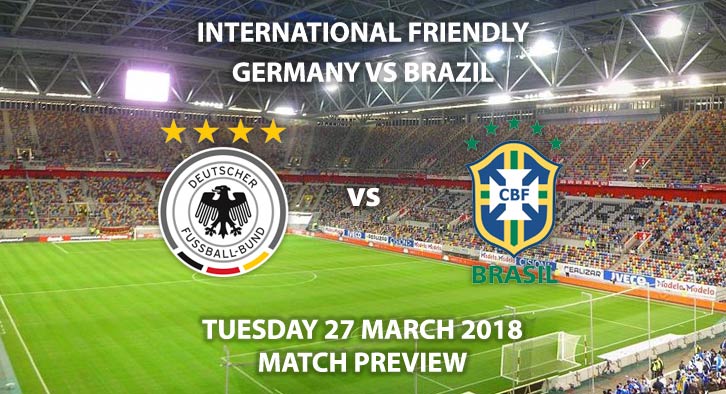 Germany vs Brazil – The World Champions Germany face Brazil for the first time since the humiliating 7-1 demolishing for the hosts at the semi-finals of that World Cup in 2014.

That was one of, if not the darkest time in Brazilian football history, alongside the Maracanazo. Tite’s Brazil side are a completely different prospect. A repeat of anything similar whatsoever result-wise is surely out of the question.

Selecao blitzed through the South American qualifying campaign for Russia, winning the group by 10 points and only losing once. Those dominant 18 games, including a 3-0 victory over rivals Argentina, now see Brazil 2nd in the FIFA World Rankings.

However, they will up against the World’s best team according to those same standings. Germany have always been a powerhouse in the world game, and in the last decade have improved yet again.
Joachim Low’s World Champions also won the Confederations Cup last summer with a completely second-string team. The strength of depth at die Mannschaft’s disposal is frightening.

This match will see Germany’s preparations to retain their World Cup in full flow. There are undoubtedly still places up for grabs and a showing against Brazil could well stake that claim.

Despite drawing their last three matches, including the 1-1 draw with Spain last time out and a stalemate against England, Germany are now on an astounding 22-match unbeaten run – stretching all the way back to their defeat against France in the semi-finals of the 2016 European Championships.
Brazil too are in imperious form. They have lost only once in their last 18 – 1-0 to Argenina – and won 14 of those fixtures.

This really is the creme de la creme of international friendlies. Some of the world’s finest players on display. Despite no Neymar due to injury, Phillipe Coutinho, Thomas Muller, Marcelo, Tony Kroos, Casemiro, Marc-Andre ter Stegen and many more elite players will take to the field.

The two most fancied sides to claim football’s ultimate prize. The two highest ranked, and justifiably so, teams on the planet. There is a rich history, and a point of vengeance intertwined. A friendly match that doesn’t need to be talked up, but it is very easy to do so. What a match we have in store.

Jonas Eriksson will be the man tasked with controlling this game. Normally found in the Allsvenskan, the Swedish referee has also taken charge of three Champions League fixtures this season. Most notably,  dishing out two red cards in the bizarre Porto 5-2 Monaco game in the group stage.

Eriksson also gave out marching orders in his last international, Scotland’s 2-2 draw with Slovenia that saw the end of their World Cup qualification hopes. More recently, officiating Man City’s 4-0 drubbing of Basel in Switzerland, and Arsenal’s 3-1 home victory to Italian giants AC Milan in the Europa League, giving out four and five yellows in each game respectively.

Germany vs Brazil will be televised in the UK on BT Sport 2 with kick-off at 19:45 GMT.

In line with Germany’s recent results, a draw with both forceful attacks finding a breakthrough.