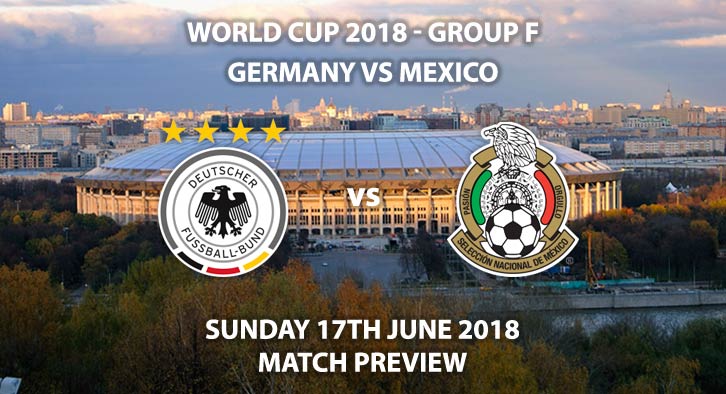 Germany vs Mexico is the second game today. World champions Germany begin the defence of their title on Sunday night against Mexico as they aim to get off to the perfect start in Group F.

Manager Joachim Low controversially left Leroy Sane from his World Cup squad; which is the biggest testament to the Germans strength in depth. Thomas Muller, who often relishes major tournament, is again expected to be their source of goals alongside Timo Werner. The RB Leipzig youngster has established himself as Germany’s first-choice striker, as well as one of Europe’s hottest prospects. He scored 23 goals in the Bundesliga last season making him the division’s sixth highest scorer.

Manuel Neuer is expected to start and captain Germany, despite missing the last six months through injury. Second-choice ‘keeper Marc-Andre ter Stegen has been one of Europe’s best performers this season, which just highlights how highly Neuer is rated. Sweden and the Korean Republic make up the rest of Group F and as a result I would be shocked if Germany didn’t qualify as group winners.

Mexico topped their qualifying group, picking up 21 points from their ten matches. Javier Hernandez will carry most of the goal-scoring burden in Russia, with Mexico only scoring 16 goals in qualifying. They did, however, only concede seven goals, which points to how they will play this summer. Germany are clear favourites to win Group E and consequently there is a realistic chance of any of the other three sides taking second place. Ensuring they avoid a beating against Germany could be pivotal to Mexico’s chance of progressing into the last 16. Goalkeeper Guillermo Ochoa announced himself on the world stage four years ago with a string of impressive performances; he is expected to be busy against this summer and will need to be at his best if Mexico are to qualify.

Alireza Faghani is the referee for this match. The Iranian refereed at the 2014 World Cup – but was named as a fourth official for the opener between Brazil and Croatia. He’s also been on the big stage at the Olympics and numerous AFC Cup finals around the continent. In a 108 international games he has averaged 4.34 yellow cards per game and 0.23 reds. With that in mind, I would advise a total of 30+ booking points.

Although I really believe Mexico have a strong chance of finishing in second place, Germany should be far too strong for them. It will take a very good side to prevent Low’s team retaining their title and therefore they should grab a comfortable win on Sunday.

Germany vs Mexico will be televised live in the UK on BBC 1 with kick-off at 16:00 GMT.