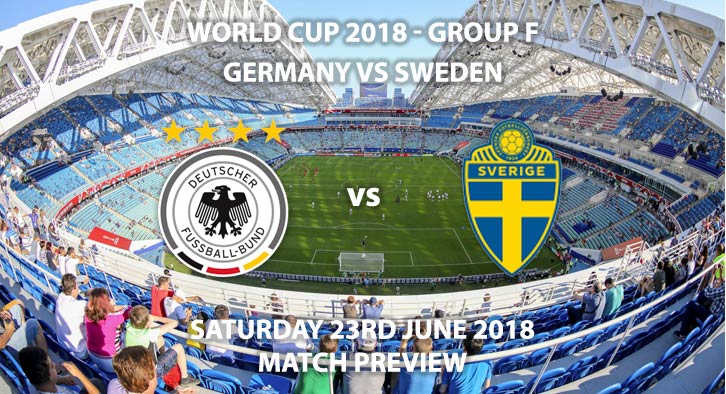 Germany vs Sweden – the Germans will be hoping to bounce back from their shock defeat to Mexico when they take on Sweden in Group F.

The world champions got off to the worst possible start, losing 1-0 to the Mexicans. Hirving Lozano was enough to separate the teams, although, in truth, the scoreline could have been bigger. Despite dominating the ball, Germany left themselves open to the counter-attack. Lozano, Javier Hernandez and Carlos Vela, in particular, were a constant menace with their pace and movement. Germany were restricted to just half-chance, which they couldn’t take advantage of. Substitute Mario Gomez was the guilty party as he missed their best chance in the second-half. This result was a real shock; Germany had looked strong in their recent warm-up friendlies. With the calibre of players they have, I would expect their defeat to spur them on, as they bid to make amends.

Sweden kicked off their World Cup campaign with a 1-0 win against South Korea. Defender Andreas Granqvist’s penalty was enough to seal the win, despite the best efforts of Korea ‘keeper Hyeonwoo Jo. In truth, it could have been a much larger scoreline but, without Zlatan Ibrahimovic, Sweden were wasteful in front of goal. However, despite the absence of Manchester United defender Victor Lindelof, who missed the game through illness, Sweden looked solid. They will have to maintain that level of defensive stability if they’re to keep out Germany, who have to win this game. Sweden know a point would put them in a prime position to qualify, although they would still stand a good chance if they lost.

Germany have a team full of winners. They will be desperate to re-write their wrongs and I’d expect to see a different animal entirely in this game. Sweden’s lack a clinical finisher and I struggle to see them being able to counter-attack Germany as Mexico did.

Tips updated at 17:30 GMT on 22nd June 2018 – we should be updating the preview before kick off again so keep checking back.