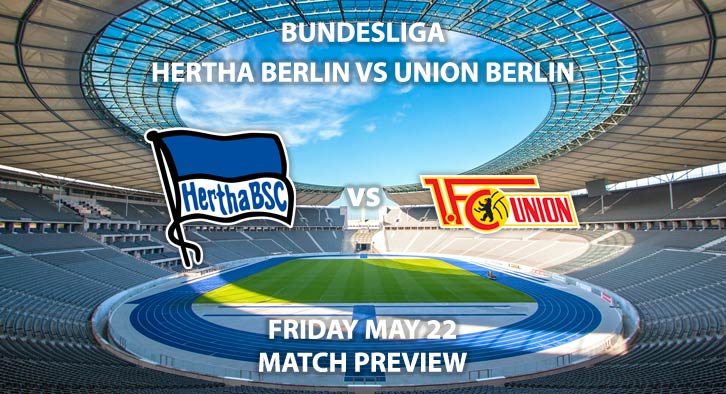 The much-anticipated Berlin derby is upon us as the Bundesliga kickstarts the second week of action since the return from the coronavirus pandemic.

Their first match back faired rather differently, with Friday night’s hosts being the much happier after a 3-0 victory. This match has a rich, dramatic history but this instalment will be a little stranger to watch, with the 90 minutes being played behind closed doors.

Hertha Berlin are slight favourites for this tie and are priced at 13/10 to win the match by Bet365. After an expectedly slow start to their match against Hoffenheim last weekend, Hertha found their feet in a rampant second 45 and showcased their attacking prowess and creativity. However, they have suffered from inconsistency this season and did suffer defeat earlier in the campaign against Union.

In attack, veteran striker Vedad Ibisevic marked his return to the pitch with a goal last Saturday. Skybet have him priced at 21/10 to score anytime.

Union Berlin will hope to leapfrog their biggest rivals in the standings with an away victory and are priced at 21/10 with skybet to do so. The visitors have impressed from their standards during this term, but recent form makes for worrying reading. There was no shame in last weekend’s loss to Bayern Munich and their away form is not terrible, with three wins on the road from five.

Going forward, Sebastian Andersson will be Union’s best chance at making it a league double against their rivals and he has 11 goals this season. He is priced at 4/1 to score anytime with SkyBet.

Last time these two met, it was a cagey affair that saw just 20 booking points brandished. However, things could get a little more heated with so much time to prepare for the local derby and SkyBet are offering 4/5 for 50+ booking points.

– The hosts will be riding high from their last victory where they looked dangerous in wide positions, an area Union can be exposed in.