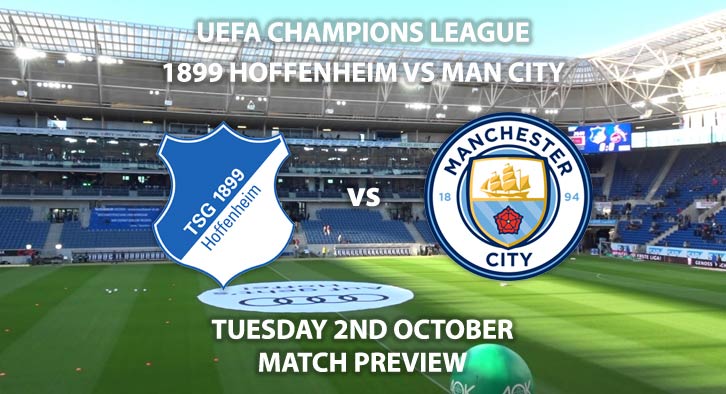 Hoffenheim vs Manchester City: Manchester City will be desperate to open their Champions League account for the season after a surprising defeat against Lyon when they take on Hoffenheim.

The champions of England got off to a horrible start in group F, losing 2-1 to Lyon on matchday one. The French side were fully deserving of the win and became only the second side to beat City at home in this competition under Pep Guardiola. In the league, however, things have been much smoother for City. They moved level on points with Liverpool at the top of the Premier League at the weekend, following a comprehensive 2-0 win over Brighton.

Raheem Sterling was in the thick of the action, scoring the first before supplying Sergio Aguero with a telling assist for their second. The Englishman has been in fine form this season, picking up from his best-ever goalscoring campaign last year. Guardiola will also be buoyed by the new Kevin De Bruyne is set to resume training after knee ligament damage, although be a few weeks before he returns to match action. The most impressive stat behind City’s unbeaten start is that they have only conceded three goals. Alongside Liverpool, they have the best record in the division.

Hoffenheim drew their opening Champions League match 2-2 with Shakhtar Donetsk. Former West Ham defender Havard Nordtveit was on the scoresheet as they twice surrendered the lead and claimed just a point. In the Bundesliga, they’ve struggled this year, collecting just seven points from six league matches. Leaking goals has been their issue, with ten conceded and ten scored so far. At the weekend, they were beaten 2-1 at home by Red Bull Leipzig, which condemned them to their third defeat of the league campaign.

Damir Skomina the referee for this game. The Slovenian took charge of England’s group stage game against Belgium during the World Cup, as well as Liverpool’s semi-final tie against Roma in the last season’s competition. In 148 international matches, he has an average of 4.11 cards per game. Therefore, I would advise a maximum of 50+ total points for this fixture.

Given their defeat last time out, Guardiola will be desperate for City to win this game. It won’t be easy against a tricky opponent, but their loss in the first game makes me even more confident they won’t underestimate their German counterparts. As a result, I’m going for a City win.

Hoffenheim vs Manchester City will be televised live in the UK on BT Sport 2 with kick-off being early evening at 17:55 GMT.

Odds and markets last updated on Tuesday 2nd October 2018 @11:34 GMT. Keep checking back to see if there’s any updates to markets – the time stamp in the previous sentence for when we update tips on this page will be updated.