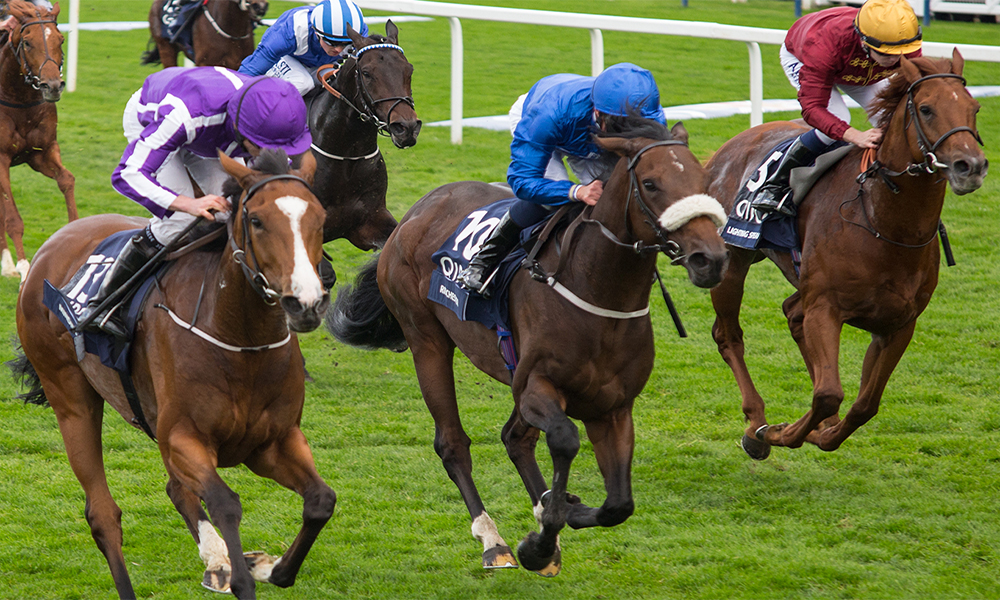 Today’s horse racing preview comes from Ascot and Champions weekend, from sprinters to middle and long distance competitor’s, this is where it all happens and with some of these possibly heading off to America or Australia to compete, it is a feast of top quality action.

Aidan O’Brien is still looking to overcome Bobby Frankel’s Group 1 achievements, however he sends over Order of St George to have a crack at this valuable Group 2, he has visited Ascot on three occasions in his career which his biggest success was when landing the Ascot Gold Cup over two and a half miles, he could only manage fourth in this two years ago when being turned over as 4/6f, he then returned again and once more beaten at the course when overhauled by Big Orange in the Gold Cup, not a surprising result to be fair.

It’s the soft ground that brings him alive, and once more he returns to Ascot as the even money favourite, however this race has been a nightmare for favourites, the last was back in 2009 ending a four year spell of winning favourites, since then the head of the market had failed to impress, in fact only two have managed to hit the frame, Motrice in 2010 & Opinion Poll in 2011 which was the first and last time we saw Ballydoyle take the race with second favourite Fame & Glory.

To be fair to Order of St George he ran a cracker when finishing fourth in this years Arc, but with them pulling out Ulysses yesterday it makes you wonder how they have actually come out of the race as the French track can take its toll on you, I can’t lie I do not fancy him here, at even money in a very competitive field is hard form to sustain. This also goes to Big Orange, who denied O’Brien’s horse a second Gold Cup by a short head, it was a great run by both horses, Big Orange comes here probably fresher from Goodwood when beaten by Stradivarius in the renewal of the Goodwood Cup.

With both Big Orange and Order of St George having tough seasons this brings me to the top three in the ratings. Sheikhzayedroad will attempt to become the first horse since Persian Punch to land this race back to back, both Persian Punch and Further Flight were the most successful in this race with the latter winning the race five times on the bounce. I am sure there is not that kind of caliber here. Last years winner though is 3lb lower than when taking this race last October, and you could say he was unlucky not to be a lot closer in the Doncaster Cup when finding all sorts of trouble at a crucial time, has to be respected.

Torcedor has to be the interesting one representing Jessica Harrington, to be fair he might have been flattered a bit as the Irish St Leger was terribly weak when behind Order of St George to nine lengths, he was never going to beat the winner, but he did put daylight between himself and the rest of the field. He was beaten comfortably in the Ascot Gold Cup by both Order of St George and Big Orange, however that was over further. I think the 117 rating I gave him here poses on what he achieved in a weak renewal in Ireland.

It is hard to see Nearly Caught getting close here for Hughie Morrison, especially as he has been beaten by the top two in the market and Torcedor at the Royal meeting, so this brings me on to the selection. Stradivarius got the better of Big Orange in the Goodwood Cup and I thought he ran a cracker in this years St leger when just denied to half a length in a thrilling finish. The question here is will he have the stamina on this softer ground to overcome the big boys, it is not going to be an easy task and he is unknown of getting the trip on the ground, but if he does I am sure Frankie will have to go early on him to see if he can hold on.

Two top sprinters go head to head once more in Harry’s Angel and Carravaggio, as the stats stand Harry’s Angel is leading the contest 2-1 after his fantastic run at Haydock when blitzing his rivals by four lengths, Tasleet and The Tin Man came out of the chasing pack to try but were no match for this speed ball. It is very hard to see him being overhauled this afternoon and those odds reflect that now coming into just shades of odds on at 10/11.

O’Brien will be looking for Group 1 glory here with Carravaggio, the last time the two met came in the July Stakes and he was brutalised by Harry’s Angel to two lengths, Limato has recently franked the race when winning the Group 2 Challenge Stakes. There are questions to be asked as Brando has beaten him twice this season – who also gets a 20/1 quote for this. Can he tie up the head to head, I do not think so, I am not a fan of tipping up odds on shots, but when you have a smart sprinter to this magnitude its like the Kauto Star v Denman of all head to heads, Harry’s Angel is just going to blitz them on this ground.

Last years winner The Tin Man would be the first to land this race back to back, on what he has shown this season he has to be respected from his run at Haydock and had the likes of Limato beaten at the Royal meeting this year, however to find over five lengths on this ground against a formidable opponent is asking too much.

This does not look as straight forward as the ratings suggest, however I am hoping Cracksman can show his class where it matters. Firstly his main adversary will be Barney Roy, since blasting on to the scene when taking the Greenham Stakes back in April at Newbury, he went on to almost take the 2000gns but could not overhaul the smart Churchill.

He took the liking of Ascot immediately when winning the St James’s Palace Stakes reversing the form with Churchill by a wide margin and was starting to show he was a serious race horse. The Coral Eclipse form will see a few of these take on each other once more, with the defect of Ulysses on Wednesday he will still have to fend off the likes of Cliffs of Moher and Desert Encounter. Something was not right at York, Churchill reversed the form with him once more, and Ulysses beat him again, with Cliffs of Moher a long way back in fourth.

Cliffs of Moher has been as you can see keeping good company all season, and he probably deserves to be in the mix at the finish line, but he disappointed me for the first time this season when only managing sixth in the Irish Champion Stakes, just over three lengths in front was Poets Word who has to be respected on this ground. However he does look up against it once more and with this being a race that O’Brien has not won it looks an upward curve.

French raiders have a reasonable record here, Brametot I fancied to run a big race in the Arc which he did when finishing fifth and posted a rating of around 117 which just puts him out of top three for me. The French 2000gns and Prix De Jockey Club winner cannot be discounted lightly, but has this race come too soon, the trainer won this last year with Almanzor and he does act on soft ground, he could make trouble for all under Demuro.

Cracksman drops back to 10f for the first time since winning at Epsom in a conditions stakes race, he had to pull out all the stops to just hold on form Permian who went on to win three good races including the King Edward VII Stakes. Just beaten in this years Derby when looking all over the winner for Frankie, has been in superb form winning two more black type races which include the Group 2 Great Voltigeur and Group 3 Prix Neil both races over 12f, is the trip going to suit, we know he has no issues with the ground, but he will have to hold his nerve and get to the front before the final furlong, as the cavalry will finish, such as Cliffs of Moher and Barney Roy wil be on his quarters in no time, but he would not be here if connections were not confident.