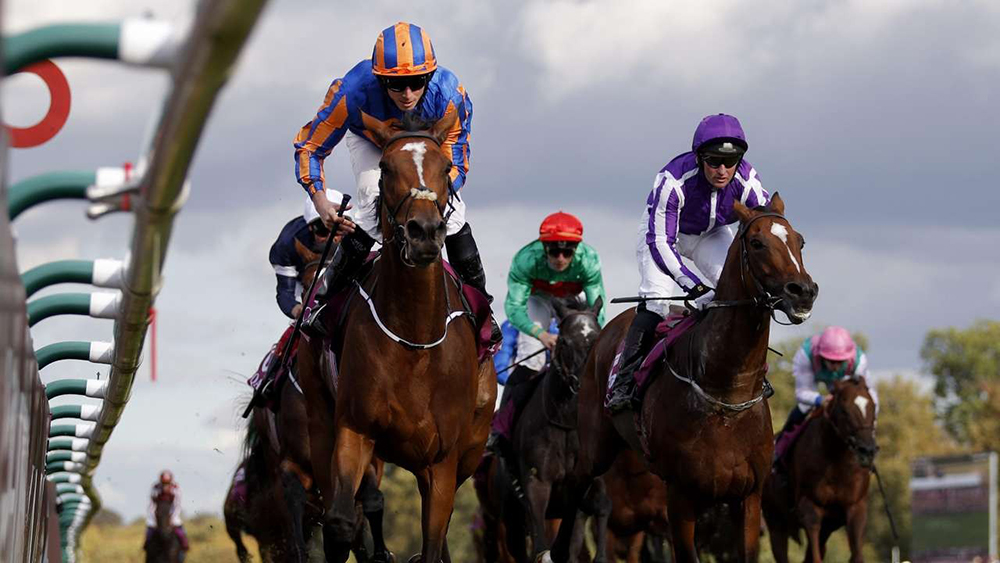 I would like to think Roger Varian’s Mount Logan can capture this event off the back of his consistent two runs this year. Two places in Listed company in 2017, he has shown the liking for cut in the ground when third in the Fred Archer Stakes at Newmarket at the turn of July when just three parts of a length behind Second Step, who has run well again last week behind Poets Word at Goodwood, however Mount Logan has not shown his ability when stepping into pattern company in the past, with three career attempts behind him at longer distances on his past two pattern runs, they drop him back to the index which saw him land a conditions Stakes race at Doncaster last year. This time of year, he seems to thrive more and on matching last year’s form he certainly looks more forward.

Owen Burrows Laraaib comes into this unbeaten, however with only the three career runs behind him he would have to step up from his Ascot Class 3 win when off a mark of 95. First time into pattern company he will be one of four that gets the age allowance this afternoon, will have to improve and show if he handles the softer conditions. One at a price is James Fanshawe’s Arthenus who ran a cracking second on soft ground in the Listed Bet365 Stakes over 10f. Competing in last year’s John Smiths Cup over today’s index finishing a long way down the field that day, but acts on ground that has cut and can’t see why he cannot get involved under Danny Tudhope who is becoming a thorn in people’s side around these races when picking up mounts away from home.

Willie Haggas’s Sea of Grace sets the standard here after her runner up spot from the French 1000gns, but it’s a race I have never been a follower of form for, and this showed when the winner ran last in this year’s Coronation Cup behind Winter, the third has also finished last in the Prix De Sandringham back in June. Even the fourth has run twice since and finished last, in fact the only two horses to take out of the French 1000 is Roly Poly and Rain Goddess. The former has gone on to land two Group 1’s since (Falmouth Stakes & Prix Rothschild), the latter has got a string of seconds to her name in Group 1 company (Pretty Polly Stakes & Irish Oaks) behind the likes of Enable is top draw form. However, do we judge Sea Of Grace on her Guineas run, as she finished behind Roly Poly in the Coronation Cup? She was basically taken off her feet by the front running tactics of Ryan Moore who just stacked them up.

She is effective on good to soft and is taking a huge drop in class into Listed company, again though I am not in favour of pattern horses dropping this significantly, Atzeni is looking to go back to back as a jockey in the race after landing this on Aljazzi for trainer Marco Botti, with trainer Willie Haggas looking to record his second win after Token of Love back in 2014, so two previous winners teaming up, could be the force to beat. Pat Smullen is also looking to notch his second win in this race when he rides Sir Michael Stoute’s Mittens.

She was disappointing last time when only managing fifth in the Listed Valiant Stakes, with wins in 0-90 & 0-95 handicaps, it’s not always easy to step up that few extra pounds into Listed company, she has also not shown much to liking of soft ground beaten twice over this trip and 9.9f. So, on that note I am going to shy away from the obvious and have an each way punt on John Gosden’s Dancing Breeze. She is only a Newmarket maiden winner and has not shown much in this class since, in fact has failed on her past three outings to show anything, but you could say her half a length behind Queen of Time at Sandown in the Listed Coral Distaff would bring her in with a chance. Joe Fanning booked and Haydock not bad for front running tactics which Joe is renown for, Jockey won this in 2014 on Willie Haggas’ Token of Love.

Some people might think there is actually no draw bias in this race, but actually the high draw has been favoured when the ground has turned up soft, and this gives the perfect chance to today’s Nap in Poetic Charm of Charlie Appleby’s. I saw a lot of potential on debut when winning over course and distance four weeks ago when fending off both Jousi and Juliet Capulet in easy fashion. The form Is stacking up, with Jousi and Juliet Capulet both winning as has the sixth place Roulette, so I am confident that she can take this in her stride from stall 8 and make it 2-2 under the Doyler.

Main dangers look to come from Capla Temptress and Mayyasah and it’s the latter that is my main rival here. She won with plenty in hand for Sean Levey at Newbury, but it is starting to look a weak maiden after the second and third have literally been blown off the park on their next runs, Tajannus also represents the Hannon camp who has good form on good/soft ground and won here over 6f on debut, recently though she just managed to get up in the Listed Star Stakes at Sandown, but that form has been franked when somehow Billsdon Brook came from an impossible position to land a good Nursery at Goodwood last week. Sean Levey though prefers Mayyasah this time around, but I just think Poetic Charm is potentially a better filly on paper that looks to be going places. Capla Temptress won well enough around the Novice ranks over course and distance, but this looks a big step up for her this time around.

Now this is a bit different, diverting to the NHF Flat in Ireland, but purely I do like the Gordon Elliott runner here, Anytime Now, who probably deserves to win this after two excellent seconds which included last time at Downpatrick when behind Exchange Rate who was very impressive when landing his hurdling maiden at the Galway Festival. Diverting back to the dead 16f here and on soft ground he should make an impact.

I am sure we are going to see one of the Mullins horses if not two turn up in this, more than likely though the one that will take on the selection is Itsonlyrocknroll who finished third on debut under rules at Sligo, that was over further and takes the drop back to 16f, unproven on soft ground though, but being by Shantou who did not mind a bit of cut.

Last but certainly not least, Nigel Slevin’s Backstairs Bounder who is the thorn in the two above’s side. Improved a lot when third at Ballinrobe just under three weeks ago, and is another that would probably prefer the drop back to two miles, ground is a concern though.