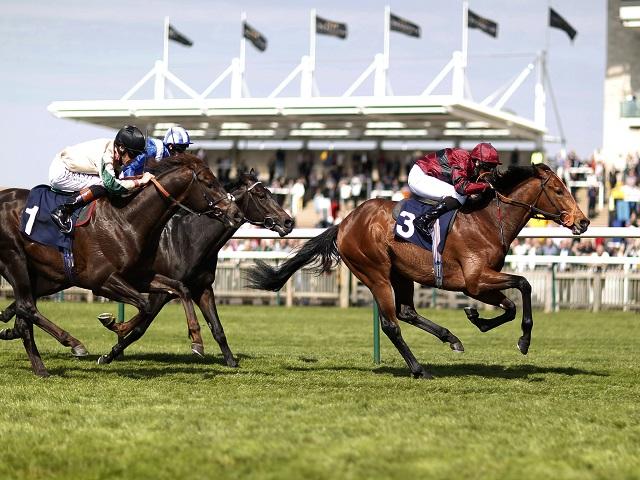 Our horse racing preview today has 2 selections from Newmarket. It’s been an exceptional Easter weekend with some nice winners to boot. Yesterday was a tough day but with Phangio again running well and Diamond Fort bringing another good price winner to the blog,  the day turned out in profit once more.

There are some good races to look over tomorrow and some decent flat races at Newmarket with some potential stars in the maidens.

This race should bring some good pointers of whom to follow this season. John Gosden has two nice looking entries here in Damocles and Mark of Approval. The latter is probably the pick of the two here who cost $400,000 at the sales, the half-brother to the smart Faydhan who commanded a rating of 102 in his career and won on his course debut over 6f.

Damocles cost just 130,000 as a yearling, the son of Siyouni will have an aid in debut this afternoon being the tongue strap and sounds like he could be a bit boisterous for his first run. Charles Hills entry here is Dawaaleeb who is related to High Command, the sire Invincible Spirit brings speed to the pedigree along with staying power in Chester House who is the dam-sire, I would like to think he is worth watching in the market.

Godolphin have actually hit the ground running, which by their standards with juveniles have not been that great in recent years and there best representative here looks to be in Night Circus.

He is another by invincible Spirit, half-brother to useful mile and a quarter winner Momayyaz, he is guaranteed to get up to 12f plus on pedigree being related to Bauer but this just might be a stiff starting point with more potential on show.

Another trainer in form is Richard Hannon who has booked the cheeky Italian to ride his daughter of Canford Cliffs. Jalela is well related to winners. but to suggest she can overturn the boys here is definitely a big ask. William Haggas won this last year with the smart Sky Kingdom and once more gets a Frankel offspring to go to war with.

Elyaasaat has a Dante & Derby entry later this year, he is half-brother to Alghareed, and on pedigree alone he warrants respect starting at the 8f index, he potentially looks as though he will be kept for 10f this year. There has been significant support already for him from 11/4 into 9/4 and could be as short as 2/1 come post time.

I promised myself this year that I was going to back Hannon’s juveniles blind. Lethal Lunch started off as most of Hannon’s juveniles do at Windsor. He was exceptionally green and did not look forward enough to suggest a win was imminent. I got a recent second opinion when Endeavour won last week and I might have made a rash judgement.

Lethal Lunch is apparently well thought of by the trainer and his seventh on debut at the Sussex course was a below par performance and with that knowledge on board he looks open to much more improvement this afternoon and should be putting his best foot forward this time around.

Charlie Appleby. has another nice-looking colt in Sound and Silence, being by Exceed & Excel they usually benefit for a run over the optimum trip to be stepped up quickly to 5.5f – 6f. Never Back Down should also be there on the premises representing Hugo Palmer. An early foal by Kodiac who was seen costing in the region of 100K. Well related to one and a quarter winner Consort, this could be too sharp on debut.

I am hoping Legal Lunch can use his race course experience this afternoon. The likely dangers look to come in Sound and Silence and possibly Never Back Down with the former the main danger.