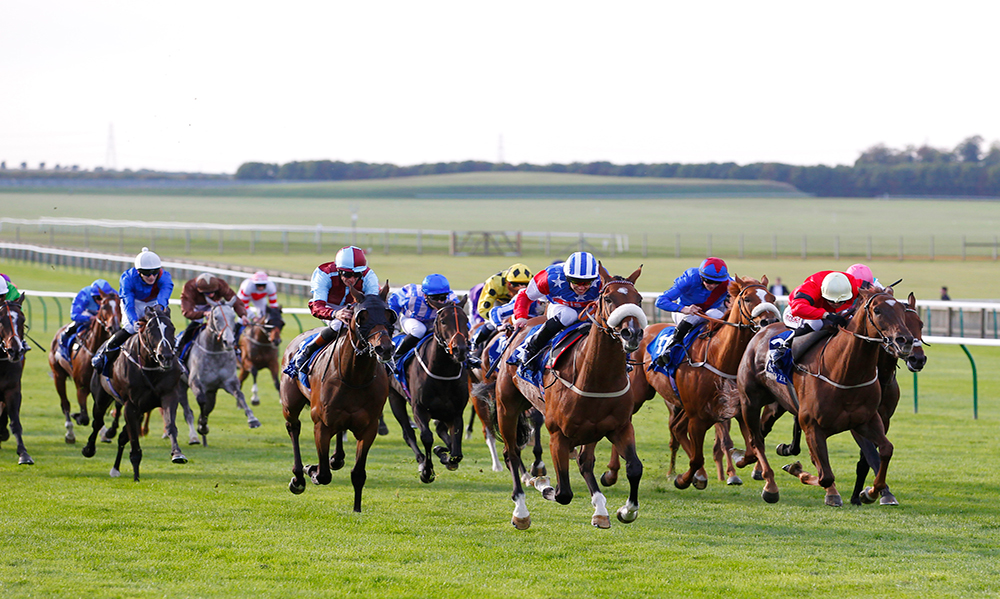 Today’s horse racing preview selections come from Newmarket, with two Group 1’s on the Newmarket card which include the Cheverley and Middle Park Stakes, a possible guidance for next years Guineas.

An opener that is very tricky with some potentially good juveniles on show. Aidan O’Brien will be looking to land his sixth winner of this years renewal when he saddles Nelson. He is one of two Frankel progeny’s in the race and looked smart when landing the Group 3 Willis Towers Watson Champions Juvenile Stakes at Leopardstown three weeks ago, but for me it was not the greatest of contests, and with an official rating of 109 he will have to step up to prove he is a worthy 11/10 shot.

John Gosden won this back in 2015 with Foundation, his representative here is the smart Roaring Lion who is looking to keep his 100% record in tact. Already proven on the surface when winning over course and distance back in August, however it is a maiden that has not been working out that well and looks vulnerable to better bred individuals here.

I was taken with the way Mark Johnston’s Mildenberger fended off Albishr in the Listed Stonehenge Stakes at Salisbury, but once more that form has taken a knock with the runner up very much disappointing in yesterday’s Somerville Stakes, with an official rating of 104 again he is another that will have to improve to win this.

The value of the race I feel is Roger Charlton’s Herculean who represents the genes of the mighty Frankel. His debut was impressive when winning his maiden at Ascot on soft ground. The maiden is still to be developed. However, I feel he beat a few good types that day especially Owen Burrows Wadilsafa who will no doubt be winning on his next visit to a race course. With a Sire who had a rating of 140 and a dam who had a 110, it should be potentially good enough to win a Group 2 of this nature, the rain will definitely help the cause this afternoon.

One horse blew me away in this field when making her debut at Goodwood, Mark Johnston’s Threading could not of been more impressive that day at Goodwood when pulling away from her field literally on the bridle recording an official six lengths win. She followed that up when winning the Group 3 Lowther Stakes at York in again a style that she was a very nice filly going forward. She had Madeline and Special Purpose well cooked in the Lowther and I honestly feel she is going to be a force when she turns three.

I am not convinced Heartache is going to be better stepping up to 6f on this ground, all of her runs have come at the optimum trip and Clive Cox’s daughter of Kyllachy was probably all out when landing the Flying Childers when beating the smart Havana Grey. Even though she was getting on top at the line at Doncaster, Havana Grey was closing her down despite the tabloid opinion feeling Heartache was going away, I have to disagree.

Ballydoyle send over Clemmie who will have the aid of the tongue tie for the first time, she was pulled from this years Moyglare Stakes purely the only reason I can come up with was the ground had come up to heavy for her, she is not going to get a honest run here either with all the rain we have been having, will she be subject of not being declared again? She is the ante-post favourite to land the race, but at 7/4 there are better improved horses in the race. One of interest is Jeremy Noseda’s Betty F who is definitely an unknown quality.

She won a novice’s contest over course and distance last month, now the race is still suspect with a few not really going on to achieve, however she is the daughter of Frankel, out of an un-raced mare Instance, she will have to step up, however Pat Smullen takes the mount.

The perfect trial for next seasons 2000 Guineas, who will be victorious? I am probably going to get it wrong as these days you can never trust Ballydoyle, but on this occasion they could have it right with US Navy Flag possibly doing the donkey work for Sioux Nation. However, I am away from the Irish raiders here and feel Karl Burke Prix Morny winner, Unfortunately, has far more to offer.

Owned by Cheverley Park Stud who won this back in 2006 with Dutch Art, have a lively contender here and the fact he beat Havana Grey convincingly and had taken the Prix Robert Papin previously when beating Frozen Angel and Heartache who attempts to step up to 6f for the first time when contending the Cheveley Park Stakes. He is a likeable type who is probably for me at the peak of his career as a juvenile, Society Rock progeny’s do get better with age.

Norfolk Stakes winner Sioux Nation is probably his main danger, he went on to take the scalp of Beckford in the Group 1 Phoenix Stakes with US Navy Flag back in fourth, the Irish raiders I feel look up against it here. Richard Fahey’s Sands of Mali who surprised me no end when landing the Gimcrack Stakes in impressive style, with Cardsharp back in third and Invincible Army back in second who was given a terrible ride recently to finish runner up in last weeks Mill Reef Stakes.

Can he show that run was no fluke, there are more likeable types i feel here, and to follow up on a group penalty is not going to be easy at all.