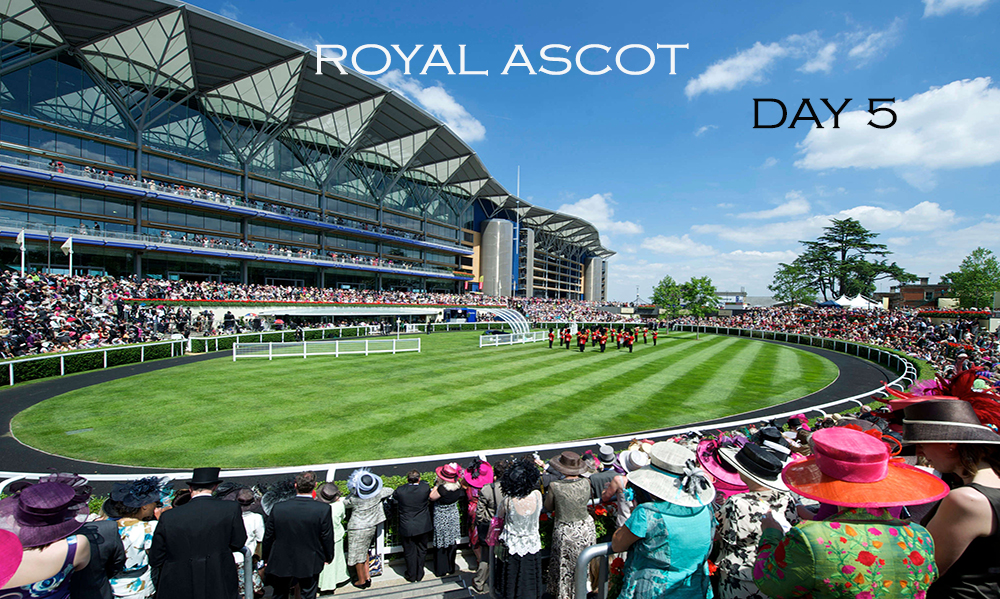 Today’s horse racing preview comes from the Royal Meeting, Ascot, It’s been a tough week to be fair probably the worst results I have most definitely encountered at this meeting.

Into the final day and once more a hard day it will be for sure and I will be covering all six races on the blog.

It’s been a frustrating week for Ballydoyle who I think have underachieved this year with their big guns getting turned over, but they still have the unbeaten Caravaggio to come later this afternoon.

I actually like their entry here with September, her maiden win was workmanlike and never really came out of second gear. She is a well bred filly by Deep Impact out of a good mare Peeping Fawn, there is a lot to like about her, one to beat.

As I have been saying all week, what’s going to beat the army of Ballydoyle? Both Westerland and Hey Gaman fought out a close finish at Leicester on debut, Dettori would have probably ridden Westerland, even though he has been declared to ride on the timeform card I can’t see it, whoever gets the spare ride should have a good race.

Sir Michael Stoute is still looking for that record winner that will take him on the same number of Royal winners as Sir Henry Cecil.

He has a big chance here with Khairaat who has come on from his juvenile status when destroying his field at Chester in this grade. The slight drop in distance should not cause too many problems, my money is on him.

As for dangers Elbereth would have a say if he was able to reproduce his second in the Dahlia Stakes when behind Somehow. It was good to see young Oisin Murphy record his first Ascot winner, big player if it all falls right.

Again, Sir Michael Stoute can surpass Henry Cecil’s milestone with the Queen’s runner Dartmouth. He showed true grit when having to fend off the late challenge of Simple Verse in a thrilling finish to the Yorkshire Cup.

Simple Verse sadly finished last in the Gold Cup, a race he should have never contended in my opinion, I honestly do not think why connections and trainer thought he would get such a marathon trip.

He is a returning champion when landing this race last year, only three have managed the feat since 1980, last being Marahaal when trained by non-other than Sir Michael Stoute, too good for these on his day and can give the Queen back to back success in the race.

So where are the likely dangers to come from? There has been no five year olds to land this renewal since the back to back wins by Maraahel. Four year olds have dominated since 2008, with Stoute looking for his sixth success in eight years and his fourth in a row.

Another returning champ is My Dream Boat who landed a surprise when taking last year’s Prince of Wales’s Stakes. It’s been a downward spiral since, but looked back to some kind of form last time out when runner up at Newbury when two lengths behind runaway winner Hawkbill in the Al Rayan Stakes.

Idaho for me has not fulfilled his promise, third in last year’s Derby which is looking weaker every time US Army Ranger makes an appearance. He had the beating of Across the Stars from the Great Voltigeur which again is looking very weak form.

For me Limato just fails to bring the coin in when I am backing him, runner up in the Commonwealth Cup when beaten convincingly by Muhaarar, his career has been lucrative, unbeaten as a juvenile he made a pleasing transition, but the wins started to come too far between.

Stepping him up to a mile at the Breeders Cup for me was not that connections thought he could get the 8f, all about the money. Another fact was the distance, he had only contended once before when fourth in the Lockinge, his Meydan run was not encouraging enough to think he can return and win.

The next three in the betting, Magical Memory, Tasleet and The Tin Man, all have desirable profiles for this race .I start with Tasleet who beat Magical Memory at York with the Tin Man back in fifth. Now I’m going to overlook the runs of the latter two mentioned, Tasleet got his ground that day and took full advantage.

Magical Memory would have been ridden for sure by Dettori, but due to injury The Doyler steps in for the mount. It was a surprise actually that Magical Memory came there swinging off the bit and found nothing, but as common as he usually is he finds nothing in a battle, I’ve backed him ante-post but I will also be looking for value elsewhere.

This comes in The Tin Man, James Fanshawe’s five-year-old finished eighth in this last year and had a few of today’s rivals in front of him. He bounced back when landing the champion sprint on his final run last season and did it with something in hand.

He was conceding 5lb to both Tasleet and Magical Memory at York, meets them both off level weights, should be reversing the form, value of the race for me.

Get ready for a calvary charge, twenty-nine entries have stood their ground. My selection, Cultirati. son of Dubawi, won here at Ascot over 7f, and went on to land big Handicaps at York and Newmarket.

He missed all of 2016 with an injury which was a shame as he is very well thought of by Godolphin, bounced back bigger and better I think, on my short list. My second horse that should be thereabout’s is Projection who can land a big handicap double for Roger Charlton who’s Atty Persse stormed to victory in the King George V Handicap.

He is a likeable type that will enjoy a test of speed, since not getting his head in front since September of 2015, his runs have been consistent. Last season a good fifth in the Stewards Cup followed up by a good third at Newmarket.

First run this year saw him finish sixth in a decent handicap at Newmarket, for me well handicapped off 103. Outback Traveller is attempting to become the first entry to go back to back since 1932, it’s only been achieved twice since the early 1800s, one of the winners was Wokingham hence the name of the race.

It would be interesting if Thomas Hobson would attempt to win twice in a week after landing the Ascot Stakes in good fashion. He looks a far better flat horse than his hurdling career, I was surprised to see him bound away on the firm ground when most of his best runs have come on soft to heavy ground, if he runs and gets the index, he has slim claims, but I feel a non-runner.

Obviously if Thomas Hobson is pulled by Mullins we will have a reformed market so please lookout for those rule 4s and try to hang out just before the race, most high Street bookies undercut the punter early doors by 15% on actual odds.

Three of the past five winners have been trained by jump trainers, now the strangest declaration is US Army Ranger. Surely they do not think this trip is within his grasp, put in as third favourite I am totally dumfounded in what they are doing with the horse.

However Montaly impressed me even further when winning on seasons debut when landing the Chester Cup with Fun Mac further back in third, a close fifth in last year’s Ascot Stakes he could return with a big run under Oisin Murphy.

The best of luck – Gamble Responsibly