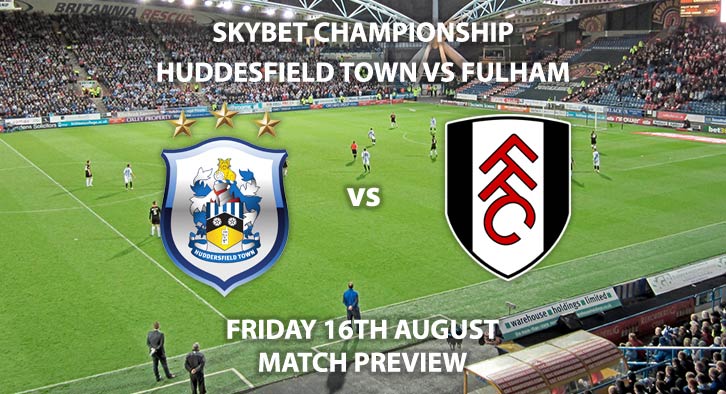 Huddersfield return to EFL Championship action as they face Fulham at the John Smith’s stadium on Friday evening.

Only 4 months ago this would have been a Premier League fixture, but off the back of disappointing tenures in the top flight both sides are adjusting to life back in the Championship following their relegation.

The Terriers have picked up where they left off following last season’s dismal campaign in the Premier League where they finished rock bottom. Jan Siewert’s side are without a win in their opening two fixtures, and to add to their sluggish start they were dumped out of the Carabao cup in midweek, losing 1-0 to League 1 side Lincoln City.

If Huddersfield are to grab their first win of the season it won’t be an easy ask. Scott Parker’s Fulham side were one of a handful of sides tipped for promotion, following several promising signings in the summer transfer window. Anthony Knockaert and Ivan Cavaleiro joined on season long loans from Brighton and Wolves respectively to help strengthen the attack alongside Aleksandr Mitrovic, who remained at Cravan Cottage following an encouraging spell last season despite Fulham’s relegation. The same cant be said however, for Ryan Sessegnon. The England Under-21 international put pen to paper on a five-year deal with Tottenham Hotspur, worth up to £25 million.

Mitrovic is one third of the attacking trio to get off the mark this season. Cavaleiro and Knockaert to score anytime is 16/1 on SkyBet.

The Cottagers claimed their first win back in the Championship at the second time of asking. The 2-0 defeat by Barnsley on the opening day was a reality check and a result not many predicted, however last weekends 2-0 victory over Blackburn Rovers got points on the board, as attention now turns to Friday nights fixture.

James Linington is the man in the middle for Friday evening’s Championship clash. Linington appeared 25 times in the Championship last season, awarding 98 yellow cards and 3 red cards in the process, an average of just under 4 yellow cards per match.

Fulham come into the fixture ever so slight favourites, with SkyBet offering odds of 6/4 on an away victory.

Despite Huddersfield’s slow start to the season, I fancy them to get a result on Friday evening. A win against promotion hopefuls Fulham would be the perfect way for the Terriers to get off the mark. Having said that, I do fancy Fulham to score, Mitrovic always offers a threat, so Huddersfield will have to remain focused if they are to keep him quiet and record a clean sheet for the first time this season.

Huddersfield Town vs Fulham will be televised live in the UK on Sky Sports Football with kick off at 19:45 BST.