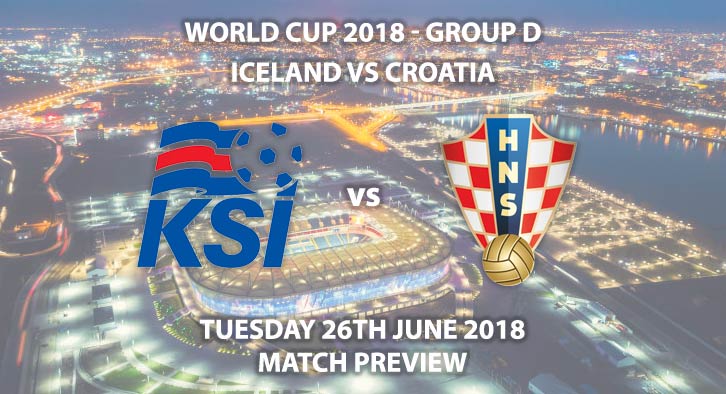 Iceland vs Croatia – Iceland suffered a disappointing defeat to the hands of Nigeria as Ahmed Musa stole headlines with an impressive brace. Gylfi Sigurdsson had the chance to give Iceland a lifeline from the penalty spot. However, fluffed his lines to leave Iceland in a poor position in the group table.

Croatia have been arguably the tournament’s best performers so far. Their 3-0 demolition job of Argentina illustrated their excellence, with Luka Modric the stand-out performer. They have already secured qualification to the knockout stages with two victories, so they could rest a few key faces to preserve energy.

Iceland were incredibly impressive in their 1-1 draw with Argentina and will now need to produce the performance of a lifetime if they are to get through the group. They are priced at 13/5 to win the match by SkyBet. Alfreð Finnbogason scored his countries first ever World Cup goal and is the Icelandic’s biggest goal threat against Croatia. He is price boosted at 7/1 to score first.

Croatia have strength in numbers throughout their squad and pose a tricky attacking threat. Striker Ante Rebic opened the scoring against Argentina and remained a threat for large quantities of the match. Mario Mandzukic is likely to lead the line; a responsibility he has impressed with so far. The Juventus striker is priced at 6/1 to score first.

Spaniard Antonio Mateu Lahoz will be the official for this match. The referee will not be a sight for Manchester City fan’s sore eyes after he went a little mental with bookings during Liverpool’s Champions League second leg against the Premier League Champions.

VAR is continuing to affect the tournaments matches as it seems to be correcting decisions aplenty. For VAR to be used in 90 mins 1+ times you will get odds of 6/4.

Tips updated at 16:55 GMT on 26th June 2018. Markets unlikely be updated again prior to the game kicking off.