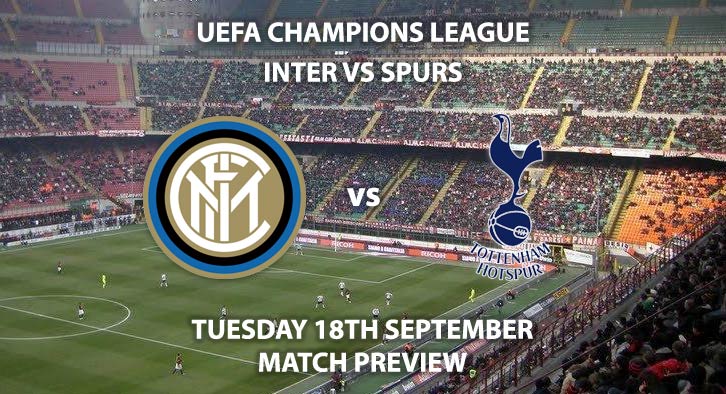 Inter vs Tottenham Hotspur – Champions League football is back with Inter Milan and Tottenham locking horns on Tuesday night.

Both teams have had mixed starts to their league campaign but will both crave European success. The rest of Group B is made up by PSV and Barcelona. With such a tough group getting 3 points in the opener is crucial.

Inter are priced at 15/8 to win the match in front of a home crowd. Despite their European stature and history, this is their first Champions League in six years. Seasons of woe have seen them slip down Serie A and out of Europe’s front runners. However, after some heavy investment in key areas, they look potent and dangerous. Mauro Icardi is the one to watch for the ‘Nerazzuri’ however he enters the match with a dry spell of goals. SkyBet have priced him at 7/2 to score first however he will have to buck up his ideas if he is to cause Spurs damage.

One stat in favour of Inter is their record at home against English opposition. They’ve won 66% of their continental home matches against Premier League clubs with 10 wins, 3 draws and 2 losses. Inter to win 1-0, 2-0 or 2-1 is 5/2 and maybe worth backing if you fancy a home victory.

Tottenham are priced at 8/5 to win on the road but this will not be easy. Mauricio Pochettino is blessed with an impressive attacking arsenal – so look no further than World Cup golden boot winner Harry Kane. Kane is arguably one of, if not the world’s best striker and is complimented with creative players surrounding him. SkyBet have priced the England captain at 5/2 to score and for Spurs to win. Well worth backing.

Spurs campaign last season saw them top their group that featured Real Madrid and Borrussia Dortmund. However, their recent record out in Italy does not make pretty reading with 3 draws and one loss in their last four visits.

The referee for this encounter will be Clement Turpin from France. Turpin is renowned for his no nonsense style of officiating so expect cards on a big night in Italy.

Inter vs Tottenham Hotspur will be televised in the UK on BT Sport 3 and kicks off at 17:55 GMT.

– Hard to split these two. Spurs have the stronger squad but away from home can always be tricky.

Odds and markets last updated on Tuesday 18th September 2018 @14:34 GMT. Keep checking back to see if there’s any updates to markets – the time stamp in the previous sentence for when we update tips on this page will be updated.