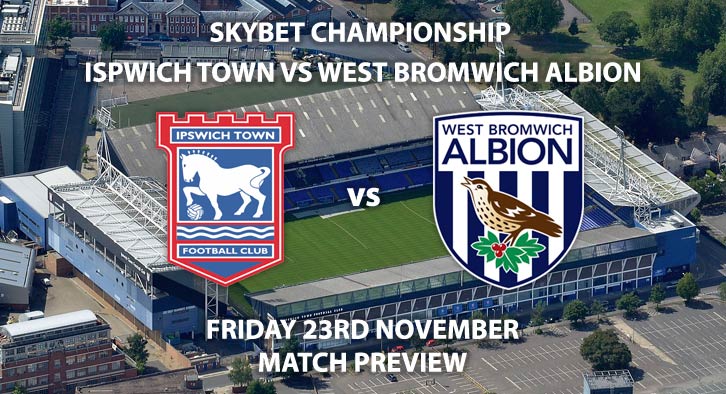 Ipswich vs West Bromwich Albion: The visitors travel to Portman Road to take on struggling Ipswich, looking to build on their impressive 4-1 win over Leeds United.

The Baggies signed off for the international break in perfect style, a 4-1 home win over Leeds. Darren Moore’s side blew past the potential table toppers with goals from Hal Robson-Kanu, Dwight Gayle, Matt Phillips and Harvey Barnes. The on-loan Leicester City midfielder has shone this season and looks to have the potential to make it in the top flight. Barnes has been used from the left at times this season but it’s undoubted that his best position is central in the ‘number ten’ role. His speed of thought and play makes him a real prospect, at the age of just 20. West Brom’s win over Leeds took them back into the top six and up to fifth, ending a run of disappointing results. The Baggies had lost three of their last four games prior to that win.

Ipswich are yet to lose in two matches since Paul Lambert replaced Paul Hurst as their manager. Before the break, they were unlucky to come away with just a point against fellow strugglers Reading, twice taking the lead. They currently prop up the Championship table with 11 points from 17 matches, having won just once. Their main issue this season has been conceding goals. They’ve leaked 28 this season, only four teams have conceded more. In attack, they’ve struggled to replace the goals of Joe Garner and Martyn Waghorn, who were both sold in the summer. Therefore, if the Tractor Boys are to stay up, they will need investment in January.

Keith Stroud is the referee for this game. The Englishman has taken charge of four second-tier matches this season, accumulating an average booking points total of 27.5. As a result, I would recommend a maximum of 50+points for this fixture.

West Brom have so many goalscorers in their side and Ipswich leak them like a sieve. Therefore, I can only see Moore’s side coming away with three points.

Ipswich Town vs West Bromwich Albion will be televised live in the UK on Sky Sports Football with kick off at 19:45 GMT.

Odds and markets last updated on Friday 23rd November @18:50 GMT. Keep checking back to see if there’s any updates to markets – the time stamp in the previous sentence for when we update tips on this page will be updated.