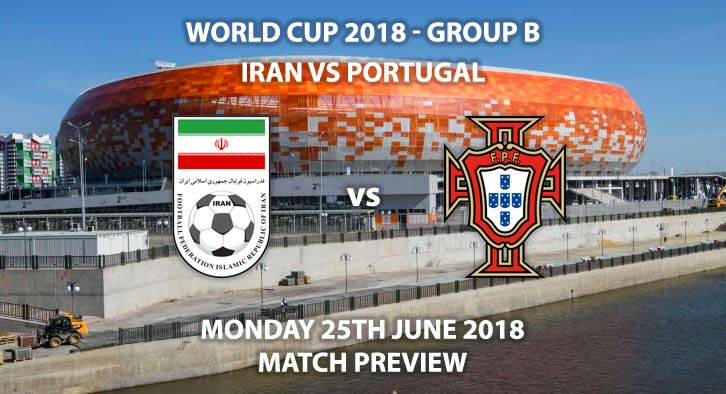 Iran vs Portgual is the last of two games in Group B. Portugal and Iran face off in Group B with both sides needing points to qualify for the round of 16.

Portugal need just a point to seal their place in the round of 16 after their 1-0 win against Morocco. Cristiano Ronaldo’s fourth goal of the tournament – in the fourth minute- was enough to seal the win. Despite winning the game, Portugal rode their luck for most of the game. Morocco were the better side but just couldn’t wield away through the Portugal rearguard. It was a very professional performance from Fernando Santos’ side although they will have to show a lot more quality in the knockout rounds. In midfield they struggled to keep possession, limiting the service for Ronaldo. Whilst he has already got four goals, they will need to provide more help for their main man if they’re to hope of replicating their success of 2016.

Iran put in one of the performances of the tournament, despite losing 1-0 to Spain last time out. Iran put in a resolute defensive display and were only beaten by Diego Costa’s fortunate strike, that cannoned in off his left knee. Still, a goal down Iran battled on and had a few chances to equalise, as well as a goal correctly ruled out for offside. Despite Spain controlled the game and dominated possession, few would have begrudged Iran a point for their plucky and resolute defending.

That defeat has left them third in the group, a point behind both Spain and Portugal. However, their future is in their own hands, if they beat Portugal they will be through and could even top the group, depending on Spain’s result against Morocco. It is a game that both teams have plenty to play for; they could both end the night top of Group B or out of the competition altogether.

Enrique Caceres is the referee for this game. The Paraguayan official has averaged 4.3 yellow and 0.23 red cards in 91 international matches. With that in mind, I would recommend a maximum of 40+ match booking points.

Iran will have to put in a similar defensive display as they did against Spain. However, Portugal have proved they are nowhere near the quality of Spain, in terms of possession and quality in midfield. I could genuinely see Iran getting a draw from this game. If not, it will be a very narrow win for Portugal.

Iran vs Portugal will be televised live in the UK on BBC 4 with kick-off at 15:00 GMT.