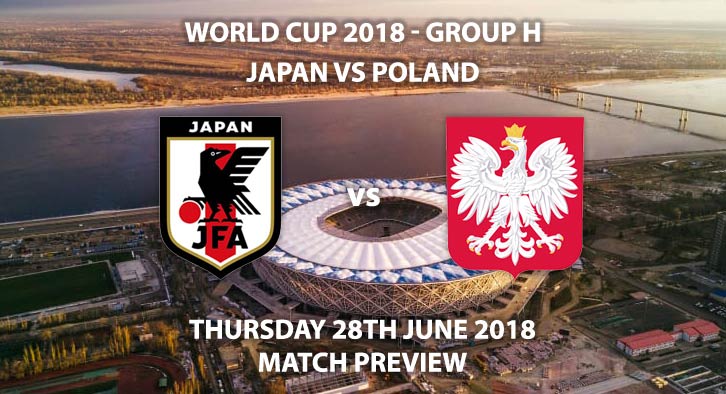 Japan vs Poland – Group H comes to a head as Japan know a draw against Poland will take them to the last 16.

Both these sides have surprised at this tournament, but for contrasting reasons. Japan ground out a 2-1 victory against group favourites Colombia in the first match. Then, the Blue Samurai earned a 2-2 draw against the impressive Senegal in a fantastic match last time out.

Poland opened their World Cup account by succumbing to a meagre 2-1 loss to Senegal. The last match was even worse, getting destroyed 3-0 by a rampant Colombia. Those two poor results and performances have seen Poland eliminated from the competition. Even more disappointing when you consider Poland haven’t played a friendly in a year to guarantee seeding for this tournament.

Japan have played their way into a great position in the group. Akira Nishino’s team currently lead Group H and with Colombia and Senegal playing a winner-takes-all match in the other game, a draw is all Japan need to qualify for the last 16 for the third time.

The permutations are actually even more complicated than that. Senegal are currently level on points and goal difference. Colombia are a point behind but have +1 better goal difference. If Japan lose by more goals than Colombia beat Senegal, then Japan can slip out into third place. It is still massively all to play for, the job is not yet done.

This gives Poland an opportunity to actually make a mark on this tournament. History is against them though. The Eagles have not kept a clean sheet at the World Cup since 1986, conceding 23 times in ten games. Both score no draw seems a good bet at 7/4 with SkyBet. If a rampant Poland turn up seeking revenge they will surely win.

If that Poland side doesn’t turn up, Japan will surely use that momentum and be undefeated in all group stage games for the first time since 2002. Takashi Inui has been on fire, scoring three in his last three for Japan after just two in his previous 26. Inui to score first and Japan win is an outside shot at 18/1 with bet365.

VAR could once again have an impact, as it has on most games. There to be an official VAR review 2+ times is 10/1 with SkyBet. Complimenting that bet, either Japan or Poland to score a penalty is 6/1 with bet365.

Poland to throw a spanner in the works and show up for the first time this tournament.