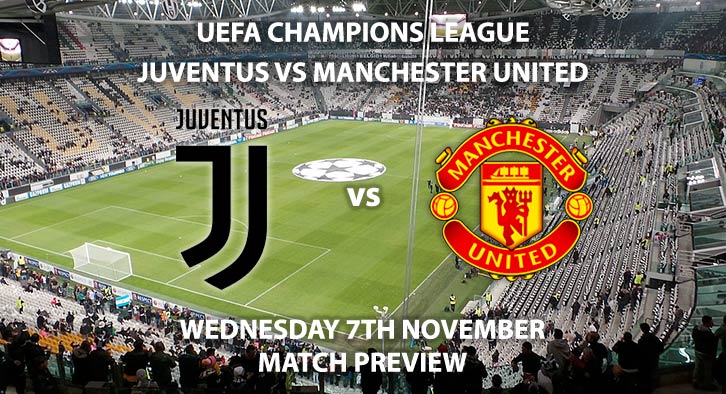 Manchester United will travel to Italy this Wednesday to face Juventus in the group stages of the UEFA Champions League.

Mourinho’s side will be looking to avenge the 1-0 loss they suffered at Old Trafford a couple weeks ago. Meanwhile The Old Lady will be hoping to keep their perfect record of maximum points and no goals conceded.

The hosts are priced at 8/13 to win on home turf by SkyBet. They are the current league leaders on Group H with three wins from three. Their vast plethora of talented players is frightening and no more frightening than Cristiano Ronaldo. The Portuguese attacker didn’t manage to get his name on the scoresheet on his emotional return to Old Trafford but is still favourite to score this Wednesday. SkyBet have priced him at 11/4 to score first.

Their defensive record is rather impeccable. They are yet to concede two or more goals at home all season and have kept a clean sheet in 36% of their league matches this season as well as not conceding a goal yet in the Champions League. SkyBet have priced them at 6/4 to win to nil and EVENS to keep a clean sheet.

Manchester United are priced at 5/1 to cause an upset in Turin. United have not had the ideal start to both their league and European campaigns. Mourinho is yet to find any consistency and much bad press is circling the club. One shining star of recent has been Anthony Martial. The Frenchman has found his way back into the starting eleven and is playing some fine football. Having found the back of the net recently, he is priced at 7/2 to score anytime.

Striker Romelu Lukaku has been struggling as of late and is in need of a confidence boost. He is priced at 3/1 to turn his form around and score. Manchester United are going to have a tough time away from home however they have the players to give Juventus a tough test. If you fancy them, you get great odds on Manchester United to win and both teams to score at 11/1.

The referee for this match will be Ovidiu Hategan. This game has the potential to become rather feisty, so I’d expect a few cards on both sides.

Juventus vs Manchester United will be televised on BT Sport 2 and kicks off at 20:00.

– Juventus are one of Europes strongest sides, especially at home. Man Utd will have to improve on recent performances.

Odds and markets last updated on Wednesday 7th November 2018 @18:41 GMT. Keep checking back to see if there’s any updates to markets – the time stamp in the previous sentence for when we update tips on this page will be updated.