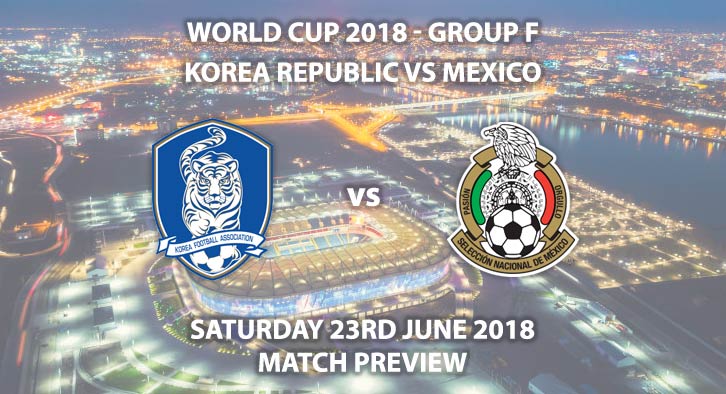 Korea Republic vs Mexico – after their surprise victory over Germany, Mexico will be hoping to kick on their campaign with another win against Korea Republic on Saturday.

That opening-day win against the world champions has put Mexico in charge of Group F. They top the group alongside Sweden who also have three points. Although Mexico defended very well, it was their counter-attacking play that really caught the eye. Hirving Lozano, in particular, impressed, as he grabbed the only goal of the game. Javier Hernandez also lead the line impressively, rolling back the years with his movement against two of the world’s best central defenders. The most impressive thing about their performance was that it was far from a ‘backs against the wall’ showing. In midfield, they matched Germany, with Hector Herrera running the show against Messrs Toni Kroos and Sami Khedira. I’d be lying if I said I fancied them before this game, however, they showed real signs of being potential dark horses.

Korea found themselves on the wrong end of a 1-0 scoreline as they kicked off their World Cup campaign against Sweden. Andreas Granqvist’s second-half penalty separated the two teams, although it could have been a bigger scoreline. Korea lacked any true quality through the pitch, with the exception of their goalkeeper. Premier League regulars Heung-Min Son and Ki Seung-Yeung were unable to influence the game. Having watched all four teams in Group F, they are by far the weakest. They lack any real threat in attack, with Son often tasked with leading the charge on his own.

Given their contrasting performances in the opening round of games, there’s really only one winner here. The real test for Mexico is to see if they can translate their impressive performance against weaker opposition.

Tips updated at 17:20 GMT on 22nd June 2018 – we should be updating the preview before kick off again so keep checking back.