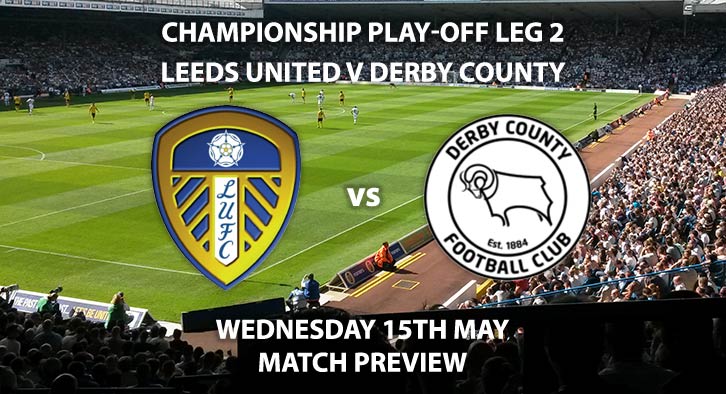 Leeds vs Derby: Leeds United will be hoping to see through their one-goal advantage when they host Derby County at Elland Road in the second leg of their Championship play-off clash.

The Whites hold a 1-0 lead heading into this definitive clash, thanks to Kemar Roofe’s winner at Pride Park. The forward buried United’s first and only real clear-cut chance in the game, although Marcelo Bielsa’s side dominated throughout. United managed to pin the Rams back into their own half and keeping their danger men at bay. A similar performance in front of their home faithful will see them reach Wembley. United did all that without the services of Pontus Jansson, who could return for this return fixture. Adam Forshaw, who limped out of the first-leg clash will be missing, as will goal-scorer Roofe.

Patrick Bamford is set to lead the line, following his return from a two-match ban, with Tyler Roberts also out injured. Leeds were victorious in this fixture last January, beating Derby 2-0 at home. Bielsa’s record now stands at played three, won three against Frank Lampard. One more positive result will see them take a step close to the Premier League.

Derby have it all to do after being beaten on home turf last Saturday. Martyn Waghorn missed that clash, with David Nugent in attack. Waghorn has bagged five goals in his last nine games for the Rams and Lampard will be hoping to have their number nine fit for this game. If Derby are to turn the tie, they will need to be braver on the ball, as their boss stated after Saturday’s performance. Therefore, the likes of Mason Mount, Harry Wilson and Duane Holmes were ineffective, and need to be bolder in possession if they are to beat Leeds’ high press. Away from home, Derby have struggled this season. That being said, they are unbeaten in their last three on the road but have only won away twice this calendar year.

Derby have to go for it here, but, their record against Leeds this season is poor. Lampard’s side are yet to prove they quality to match Bielsa’s tactics or style. As a result, I’m going for a home win.

Leeds United vs Derby County will be televised live in the UK on Sky Sports Football HD with kick off at 19:45 BST.