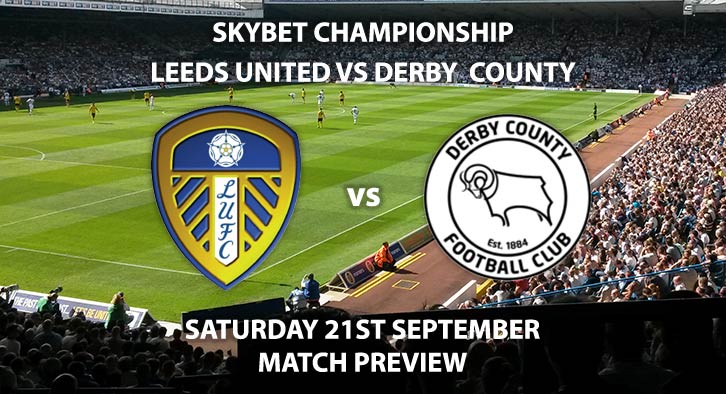 Leeds United return to Elland Road this weekend as they host Derby County in the SkyBet Championship on Saturday lunchtime.

Marcelo Bielsa’s side currently sit top of the pile in the Championship following their 2-0 defeat of Barnsley last Sunday. Derby County on the other hand are without a win since their opening day victory over Huddersfield Town.

If last seasons exploits between these two sides are anything to go by, then we are in for more drama this weekend. Lampard vs Bielsa, Spygate, ‘that’ play-off semi-final.  This fixture was the pick of the bunch in the Championship last season. But it was the Rams who had the last laugh as they shattered Leeds United’s promotion hopes in dramatic fashion. Much has changed since the last time these sides met. Philip Cocu is now in the Derby County hot seat but has struggled to hit the ground running. A win on Saturday would be the perfect way to do so.

Leeds United’s Patrick Bamford has already found the back of the net four times this season, registering three assists in the process with an average of 141 minutes per goal. Bamford to score, and Leeds United to win is at odds of 13/10 on SkyBet.

Before their victory over Leeds in May, Derby County had gone four games against Leeds where they had failed to win, losing three and drawing one. Derby come into Saturday’s match as heavy underdogs, with an away win priced at 13/2 on SkyBet.

In the last 14 meetings between these two sides BTTS has landed eight times, and SkyBet are offering odds of 5/6 for another meeting where both teams score. Leeds United to win and BTTS is at boosted odds of 2/1 on SkyBet also.

With the current contrasting form of these two sides this season, I expect the sequence to continue and see nothing other than a victory for Leeds United. Derby are winless in their last six Championship fixtures and face an inform Leeds side away from home. United lost only five times at home in the Championship last season, with home form so crucial to Leeds’s promotion dreams.

The man in charge for Saturdays encounter is Oliver Langford. Langford has officiated four Championship fixtures this season, awarding 22 yellow cards and one red card. Given the recent controversy and bad blood between these two sides, I would recommend a minimum of 50+ booking points. I’m expecting this one to be a fiery clash.

This match will be shown live on Sky Sports Football with kick off scheduled for 12:30 BST.