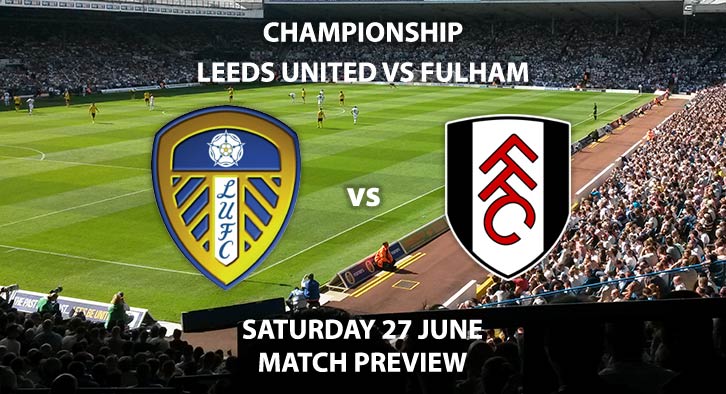 Leeds United return to Elland Road on Saturday when they host Fulham in the SkyBet Championship.

Both sides endured a difficult start on their return to Championship action, but will be hoping to put things right as the race for the Premier League hots up. Leeds were beaten 2-0 away to Cardiff meanwhile Fulham lost 2-0 at home to Brentford on the first match-day of the Championship’s resumption.

Marcelo Bielsa’s side relinquished top spot to West Brom following their defeat and trail the Baggies on goal difference. A win for Fulham this weekend would see them reduce the gap between themselves and Leeds to only four points as they chase down an automatic promotion spot. Fulham are currently just below Leeds in 3rd.

Fulham were 2-1 winners in the reverse fixture in December thanks to goals from Aleksandar Mitrovic and Josh Onomah. The visitors come into this one priced at 19/5 on SkyBet to claim all three points.

Leeds have won each of their last three home matches without conceding a goal. Fulham meanwhile are impressively unbeaten in their last seven away matches in the Championship. Something has got to give on Saturday afternoon.

Tony Harrington is the man in charge of this one. The Englishman has awarded 60 yellow cards and 3 red cards in 20 Championship appearances this season. December’s meeting between these two produced 7 yellow cards. I would recommend a minimum of 40+ booking points for this one.

Fulham’s Harry Arter has been yellow carded in his last two Championship appearances and is priced at 2/1 on Bet365 to be booked in this one.

Leeds United’s Tyler Roberts has scored 3 goals in his last 5 Championship starts. The 21-year old is priced at 15/8 on SkyBet to score anytime on Saturday afternoon.

Leeds United vs Fulham will be televised live on Sky Sports Main Event/Sky Sports football with kick off scheduled for 3PM this afternoon.