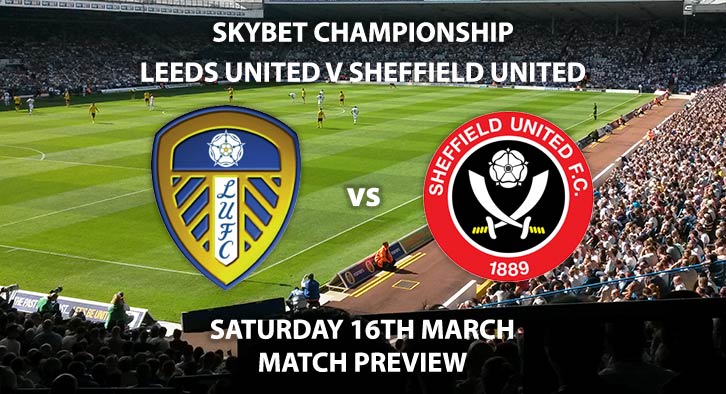 Leeds United and Sheffield United meet this weekend in a match that could have a huge effect on the automatic promotion places in the SkyBet Championship.

Both teams are in red hot form entering this match. The home side have won their last three matches and have scored eight unanswered goals. Meanwhile, the visitors have won six of their last eight matches and drawn the other two.

Leeds United are favourites for this match and are priced at 21/20 to win by SkyBet. Marcelo Bielsa has been making plenty of improvements at Leeds united and one noticeable is their form at Elland Road. They have won eight of their last ten home matches and beat their opponents last time they met there in 2010. A win would see Leeds jump five points ahead of Sheffield United and maybe overtake Norwich in top spot. Pablo Hernandez has been in great form and grabbed a brace in their last outing away at Reading. The Spaniard is priced at 14/1 to score from outside the area.

Leeds defence has been incredibly impressive since the turn of the year. They have conceded just one goal from open play and are priced at 5/2 to win to nil.

Sheffield United are priced at very tempting odds of 5/2 to win. Chris Wilder’s side are unbeaten in nine matches as they are pushing for a top two spot. However, their away form has been their downfall at times as their clinical edge seems to disappear. They have drawn three of their last five away matches. Billy Sharp has been the talisman this season with 22 goals and is priced at 15/8.

The referee for this match will be David Coote. The official has not been in charge of too many Championship matches however has averaged 36.1 booking points. Expect cards due to the calibre of the match – 60+ booking points is 5/4.

Leeds United vs Sheffield United will be televised live in the UK on Sky Sports Football with kick off at 12:30 GMT.

– The home advantage could see Bielsa’s side rally on in this promotion six-pointer.

Odds and markets last updated on Saturday 16th March 2019 @11:07 GMT. Keep checking back to see if there’s any updates to markets – the time stamp in the previous sentence for when we update tips on this page will be updated.