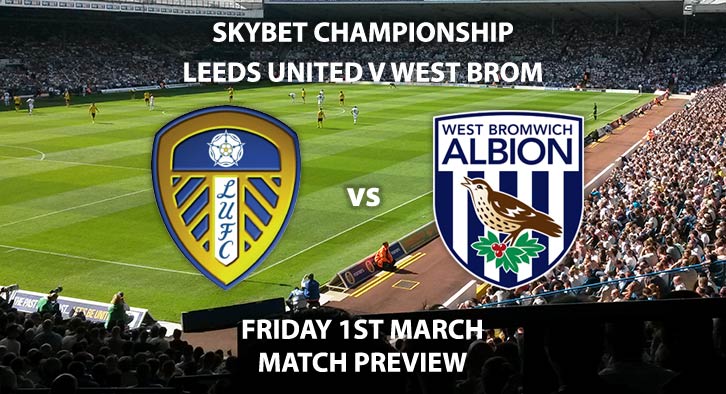 Leeds United and West Bromwich Albion –  a crucial match which could have a huge effect on who gets promoted in the SkyBet Championship.

Both clubs were disappointed in their previous outings. Leeds were halted by a 1-0 loss to QPR that saw them bitterly frustrated having had 64% possession. West Brom were also frustrated against Sheffield United as they lost 1-0 despite having 18 attempts on goal. Just one place separates the two sides with Leeds in third and their opponents four points behind in fourth.

Leeds have been pipped as slight favourites for this encounter and are priced at 23/20 to win by SkyBet. Leeds are painfully close to the top of the table, with their loss to QPR denying them top spot. However, they now return back home where they have the best record in the league. They have won 11 and lost just three on home soil and Ezgjan Alioski has been a key figure in Leeds success this season. His tricky feet and eye for goal has got them through some tough matches and he is priced at 3/1 to score anytime – having already scored 6 goals this term.

However, Leeds do enjoy some drama as they have conceded in their last seven consecutive matches. They are price boosted to 7/2 to win and for both teams to score.

West Brom are priced at 23/10 to win the match. The Baggies will enter this match frustrated that their efforts didn’t result in anything against promotion hopefuls, Sheffield United. It was the first time they failed to score in front of a home crowd all season. One man looking to get them back into winning ways will be Jay Rodriguez and the English striker has 17 goals to his name and is 15/8 to score anytime.

The referee for this match will be Tim Robinson. The official has not been shy with his cards this season and has averaged 46.2 booking points from his 26 Championship matches.

Leeds United and West Bromwich Albion will be televised on Sky Sports Football HD and kicks off at 19:45.

It’s such a tough match to call but it does seem likely there will be goals.