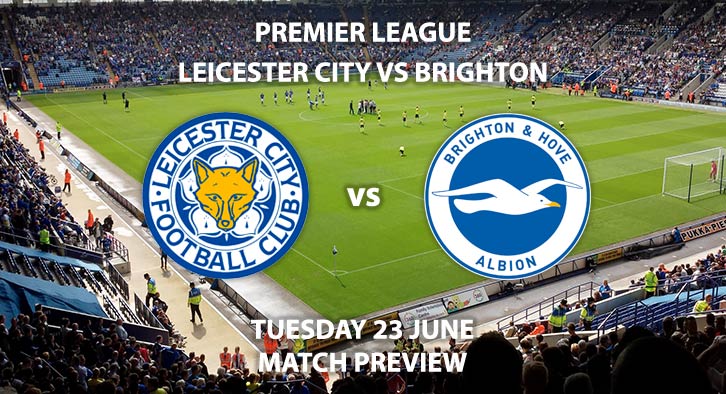 Leicester City will host Brighton as the Premier League is back in full swing with a set of midweek fixtures.

The Foxes will feel disappointed after Ben Chilwell’s late goal was cancelled out by an even later Craig Dawson bicycle kick. They are third in the league, eight points ahead of Manchester United in fifth. Meanwhile, Brighton will be riding high after they claimed a 95th minute winner against Arsenal.

Leicester City are favourites to win this match and are priced at 8/11 to win by SkyBet and take one step closer to a top four finish. Brendan Rodgers side took some time to warm up during their first match back against Watford and will take plenty of positives from the draw. They enjoyed 68% possession and will expect much of the same again.

In attack, Jamie Vardy will be hoping to continue to widen the gap from him and the others in the race for the golden boot. He is priced at 12/5 to score first.

Brighton are priced at 19/5 to claim an away victory and build on their impressive victory against Arsenal. Graham Potter’s side claimed a huge three points in their bid for survival with their first win in ten matches. They will hope to continue defying their recent form, as they have failed to win any of their last seven away matches.

In attack, Neal Maupay will hope to build on his last performance, after scoring the winner, and is priced at 5/2 to score anytime.

Last time these two met, goals from Ayoze Perez and Jamie Vardy secured a 2-0 victory at the Amex Stadium. Only 20 booking points were shown and SkyBet are offering 5/4 for 40+ booking points.

The match will be televised on Sky Sports Main Event HD and kicks off at 18:00.

– The visitors should be able to break down the hosts but it won’t be a high-scoring affair.