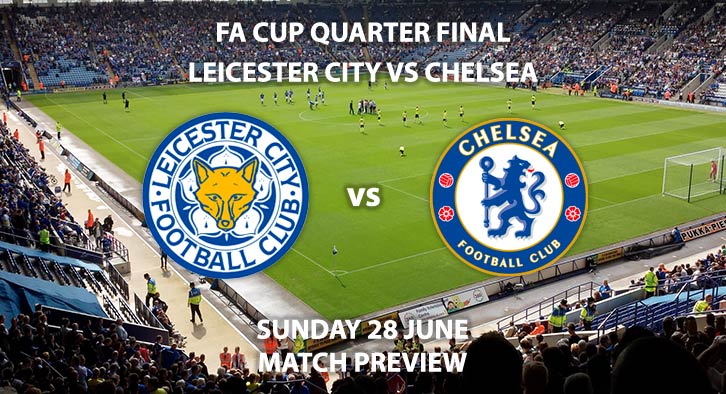 Leicester City will play host to Chelsea as they battle it out in the quarter-finals of the FA Cup on Sunday afternoon.

The Foxes beat Championship side Brentford in the last round after an early Kelechi Iheanacho strike was enough to see them advance to the final eight. Meanwhile, the blues pulled off a mightily impressive victory over Premier League champions Liverpool with goals from Willian and Ross Barkley.

Leicester City will have a tough afternoon ahead of them at the King Power Stadium and are priced at 7/4 to win the match by SkyBet. Brendan Rodger’s side have most definitely felt the effects of the enforced break, as they have only managed to secure draws against Watford and Brighton. However, history could give them the slight edge as they were the last team to win this tie between the two clubs back in 2018. It has been draws ever since.

Going forward, Jamie Vardy has been his usual clinical self with 19 league goals this season and he is priced at 5/4 to score anytime.

Chelsea are slight favourites for this encounter and are priced at 6/4 to claim an away victory and advance to the final four. Frank Lampard’s side enter this fixture off the back of an incredible 2-1 victory over Manchester City that handed Liverpool their first Premier League title. Christian Pulisic and Willian found the net as the Blues made it five wins in a row in all competitions. They have looked fitter and sharper than others since the restart of football.

In attack, Christian Pulisic has looked very lively since returning from injury and is priced at 23/10 to score anytime.

Last time these two met in the Premier League, a crazy second half saw them draw 2-2 at the King Power Stadium. Harvey Barnes and Chelsea target Ben Chilwell scored for the Foxes but an Antonio Rudiger brace ensured they shared the points back in February.

– The visitors mean business as they have had key players return from injury. Will be close but fancy them to pip it.