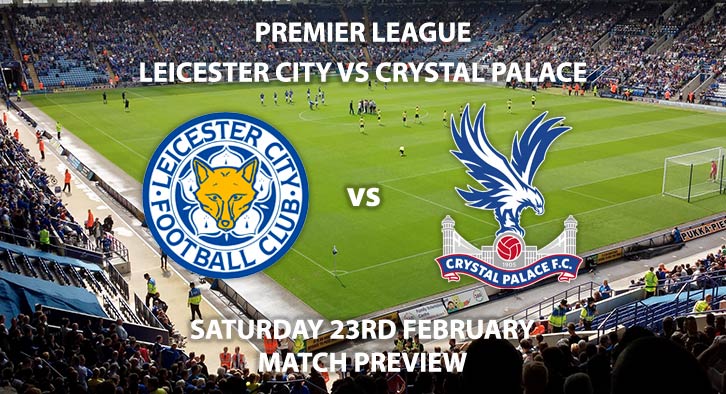 The hosts will be hoping to end their bad form which has seen them lose five of their last six matches and draw the other. Meanwhile, the visitors are unbeaten in five matches and are climbing away from the relegation battle. The Foxes are 12thwith their opponents in 13thand five points separate the two sides.

Leicester are slight favourites for this encounter and SkyBet have priced them at 23/20 to win. Their form does make for grim reading and is the joint worst in the league in their last five matches. They haven’t managed to make their home a fortress this season however very rarely get beaten by a big margin. Claude Puel’s side have scored just seven in their last nine home league matches however one man who will look to even those stats will be Jamie Vardy. The striker has eight goals this season and is price boosted to 5/1 to open the scoring.

Two of the last three meetings between these two has seen a red card. SkyBet are offering 7/2 for a player to be sent off.

Crystal Palace are priced at a very tempting 12/5 to win given their recent form. Roy Hodgson’s side have rejuvenated after a long period of frustrating results. Their performances have been solid for much of the season however only recently their results have been justifying their efforts. Wilfried Zaha has also got out of his slump and has scored in his last two league outings. He is price boosted to 8/1 to score first.

The referee for this match will be Anthony Taylor. The official has not been too card happy this season. He has an average of 30 booking points from his 16 Premier League matches. 40+ booking points is priced at 8/11.

Leicester City vs Crystal Palace will be televised on BT Sport 1 HD and kicks off at 17:30.

– The away side enter this match in form and can surprise the home crowd.

Odds and markets last updated on Saturday 23rd February @14:25 GMT. Keep checking back to see if there’s any updates to markets – the time stamp in the previous sentence for when we update tips on this page will be updated.