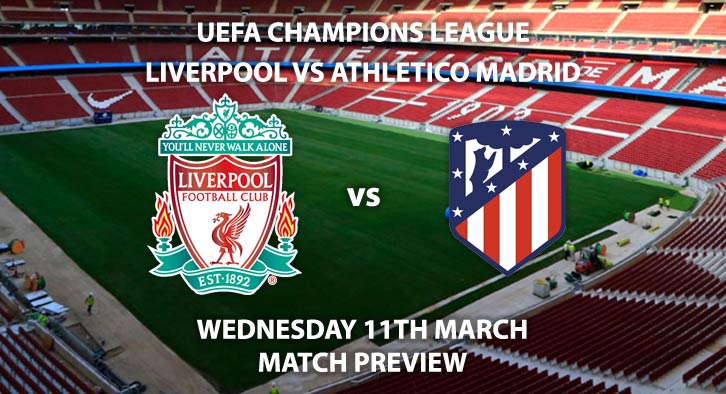 Liverpool will host Atletico Madrid in the second leg of their UEFA Champions League tie.

In the first leg, Atletico Madrid ran out 1-0 victors over the Premier League leaders with an early 4th minute goal from midfielder Saul. Liverpool are going through the first sticky patch of their season with three losses in their last five matches across all competitions.

Liverpool are priced at 4/7 by SkyBet to win the match and keep their European title defence alive. Jurgen Klopp’s side will want to get back to winning ways after cup defeats to Chelsea and their Wednesday opponents. However, they are unbeaten in 12 matches at Anfield and will still feel confident in their own abilities.

In attack, Mohamed Salah has been his usual self in Europe with four goals and two assists. He is priced at 11/8 to score anytime.

Atletico Madrid are priced at 6/1 to claim an away victory and knock out the current Champions League champions. The Spanish outfit were well organised in the first leg but face a much tougher test as they visit the Reds at the formidable Anfield. Whilst they are unbeaten in five matches, they have failed to win an away match in six trips and that stat could be telling.

Alvaro Morata is Atletico Madrid’s top scorer in La Liga with eight goals and is priced at 13/5 to score anytime.

The referee for this match will be Dutch official Danny Makkelie. In the last leg, there were 40 booking points brandished as Liverpool struggled to contain their Spanish counterparts.

Liverpool vs Atletico Madrid will be televised live in the UK on BT Sport 2 HD and kicks off at 20:00.

– The hosts should do just enough to progress to the next round after a shaky fortnight.