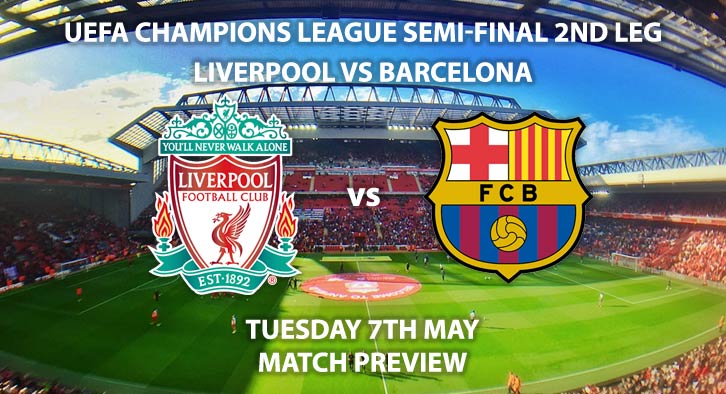 Liverpool vs Barcelona: Liverpool will be hoping to launch another one of the Champions League’s most famous comebacks as they bid to overturn a three-goal deficit against Barcelona on Tuesday.

The Reds suffered a disappointing 3-0 reverse in Catalonia last week, with Lionel Messi at his sublime best. A brace from the Argentine, coupled with a Luis Suarez opener, did the damage, leaving Liverpool’s hopes of a second Champions League final in as many years in tatters. Although Jurgen Klopp’s side came away from the Camp Nou convincingly beaten on the scoreline, the Reds were in the game for large portions of the game. Mohamad Salah, amongst others, was guilty of missing some key chances at pivotal moments before Messi stepped in.

Although it isn’t past Liverpool to score three times at Anfield, it will be some ask to do so without a reply. One away goal for Barcelona would leave Liverpool needing five, which really would be mission impossible. Roberto Firmino could miss the clash after the striker missed the weekend win over Newcastle. Divock Origi, the match-winner at St James’ Park could be in line to deputise for the Brazilian in attack.

Barcelona rested all of their star men at the weekend, with La Liga already sewn up. Their target is fixed on the Champions League, a trophy they last won in 2015. Messi’s first-leg genius looks to have secured a place in this year’s final but for a catastrophe at Anfield. Their record in England is good, they haven’t lost in each of their six trips, including wins at both Manchester clubs. Unlike Liverpool, who had to field their strongest side as they continue to battle for the Premier League title, Barcelona’s extra rest could pay dividends. It’s very difficult to see them conceding three, given they have only done that once this season.

Cüneyt Çakır is the referee for this game. The Turkish man was in charge of the second-leg clash between Manchester City and Tottenham last month. He has officiated 25 matches this season. In that time, he has accumulated a total of 3.84 cards per game. Therefore, I would advise a maximum of 60+ total booking points for this fixture.

Liverpool are very much up against it against one of Europe’s elite side. I can see them scoring a few goals, maybe even winning, but I can’t see them keeping Messi quiet all evening.

Liverpool vs Barcelona will be televised live in the UK on BT Sport 2 with kick off at 20:00 BST.