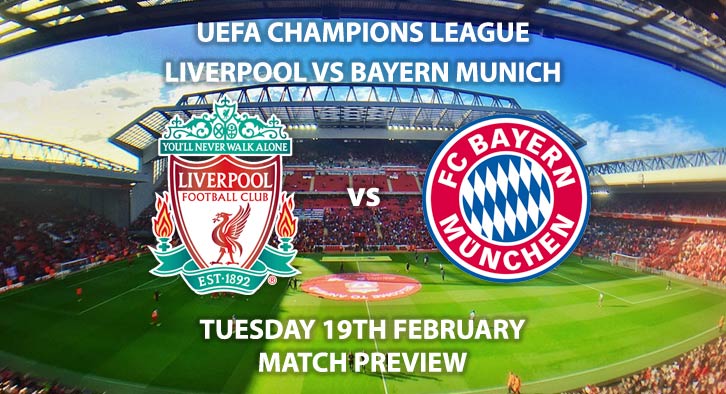 Liverpool vs Bayern: Liverpool will be hoping to take make the most of home advantage when they host Bayern Munich in the first leg of their UEFA Champions League knock-out tie.

The Reds weren’t in action this weekend after being knocked out of the FA Cup in the third round. That timely break has set Jurgen Klopp’s men up nicely for this meeting on Tuesday night. Last time out, the Reds comfortably dispatched of Bournemouth 3-0. Gini Wijnaldum was back in the side, and on the score sheet, after missing the previous two games. The Dutch midfielder has been Jurgen Klopp’s most consistent selection in the heart of midfield this season. Wijnaldum has established himself as a core member in this Reds side and his energy will be vital against the German champions. Sadio Mane opened the scoring against the Cherries, which is his fourth goal in as many games. The Malian international is hitting a hot streak of form at just the right time.

Bayern Munich recovered from twice going behind as they Augsburg 3-2 on Friday night. Niko Kovac’s side were far from convincing and needed the hot Kingsley Coman to rescue them as he bagged a brace. The French international limped off with an injury in that game but has been given the all-clear to travel to England. Bayern sit two points behind league leaders Borussia Dortmund but having played a game extra. After six straight league title, it would be a massive underachievement if they were to miss out on the Bundesliga this year. That has cranked up the pressure even further on Kovac, ahead of this tie.

Gianluca Rocchi is the referee for this game. The Italian official plies his trade in Serie A and has averaged 4.89 cards across nine matches this season. Therefore, I would recommend a maximum of 60+ total booking points for this fixture.

Liverpool’s speed and fluidity could cause Bayern major issues on the counter-attack. The Reds’ form makes them favourites for this game, in my eyes. As a result, I’m going for a home win.

Odds and markets last updated on Tuesday 19th February 2018 @18:41 GMT. Keep checking back to see if there’s any updates to markets – the time stamp in the previous sentence for when we update tips on this page will be updated.