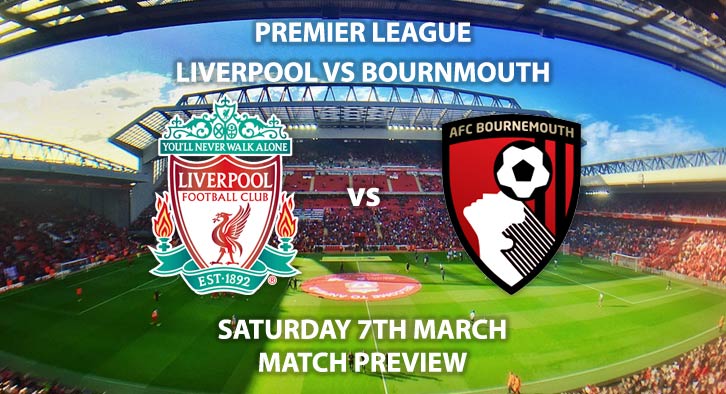 Liverpool return to Premier League action this weekend as they host Bournemouth at Anfield on Saturday lunchtime.

Jurgen Klopp’s side will be desperate to get back on track following three defeats in their last four matches. Last weekend’s defeat to Watford ended the reds’ hopes of Premier League invincibility this season, but a win on Saturday would mean three more wins is all it wold take to get their hands on the Premier League title.

Eddie Howe’s Bournemouth side on the other hand find themselves in a battle to avoid relegation and sit 18th. The Cherries are one of three sides on 27 points but occupy the third relegation spot due to their inferior goal difference.

Bournemouth have won only twice in the Premier League this year and have lost six of their ten matches in the Premier League since Christmas. Eddie Howe’s side have shipped seven goals in their last three games and face the near impossible task of shutting out the second highest scorers in the division on Saturday. They will however take confidence from Liverpool’s current form, as they’ve failed to score in their last two games on the bounce.

Liverpool have won the last five consecutive meetings in this fixture, and won the most recent clash 3-0 back in December. Bournemouth’s only win in this fixture came in December 2016 at the Vitality Stadium. The Cherries have never won at Anfield.

Paul Tierney is the referee for this one, and has averaged three yellow cards per game in his nineteen appearances in the Premier League. For Saturdays encounter, I would recommend a minimum of 20+ booking points.

Mohamed Salah has a 100% scoring record against Bournemouth in the Premier League, scoring seven times in his five appearances against the Cherries. SkyBet have Salah at 12/5 to open the scoring on Saturday lunchtime.

Liverpool vs Bournemouth will be televised live in the UK on BT Sport 1 with kick off at 12:30 PM.