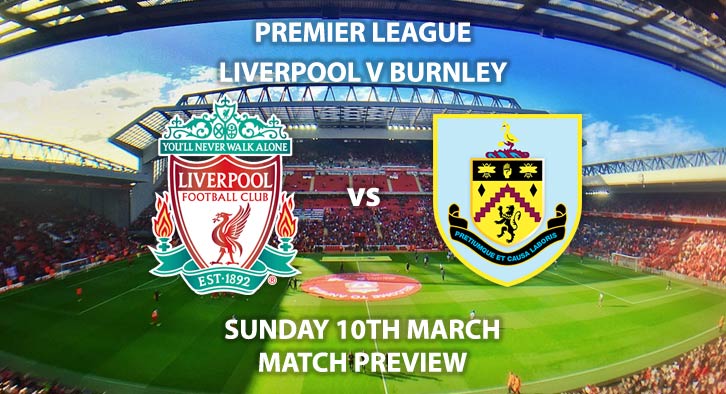 Liverpool vs Burnley: Liverpool will be hoping to close the gap on Manchester City at the top of the Premier League table when they host strugglers Burnley at Anfield.

The Reds fell to second spot after last week’s 0-0 draw away at Everton. With City playing on Saturday night, the gap between Liverpool and City could be four points ahead of this game. Therefore, this is a must-win game for Jurgen Klopp’s side, as they look to re-establish themselves in the title race. It’s been a tough run for Liverpool, who have dropped six points in their last five games. They held a seven-point cushion in December but the pressure seems to have told. Injuries haven’t helped matters – Roberto Firmino returned to action off the bench at Goodison, whilst Dejan Lovren is still out. Liverpool’s main issues seems to be a lack of creativity in midfield. These last few games have been the first where they look to have missed Philippe Coutinho. They also missed out on Nabil Fekir in the summer, whilst Nabi Keita has failed to live up to expectations, so far. Liverpool are unbeaten at Anfield this season and have won four of their last five league home fixtures.

Burnley suffered disappointing back-to-back defeats last week, after being in fine form. The Clarets’ 3-1 home defeat to Crystal Palace has left them in 16th spot, five points above 18th-placed Cardiff City. Prior to those results, Sean Dyche’s side had experienced an upturn in form, with a run of seven games unbeaten. It’s also remembering that Burnley beat Tottenham not so long ago, and claimed a point away at Manchester United, in a game they should have won. That being said, this is a much tougher task. Their defence has recorded one clean sheet from their last nine games, which should be a major concern heading to Anfield.

Andre Marriner is the referee for this fixture. The Englishman has officiated 34 top-flight matches this season. In that time, he has accumulated an average booking points total of 32.5. Therefore, I would advise a maximum of 50+ total points for this fixture.

Liverpool will be desperate to get back to winning ways after a week of intense scrutiny. At Anfield, they have been imperious this season. As a result, I’m backing them to bounce back, in emphatic style.

Liverpool vs Burnley will be televised live in the UK on BT Sport 1 with kick-off at 12:00 GMT.

Odds and markets last updated on Sunday 10th March @10:45 GMT. Keep checking back to see if there’s any updates to markets – the time stamp in the previous sentence for when we update tips on this page will be updated.

Remember to keep visiting the tips and preview area for further updates and betting previews around the domestic and European action during the week.