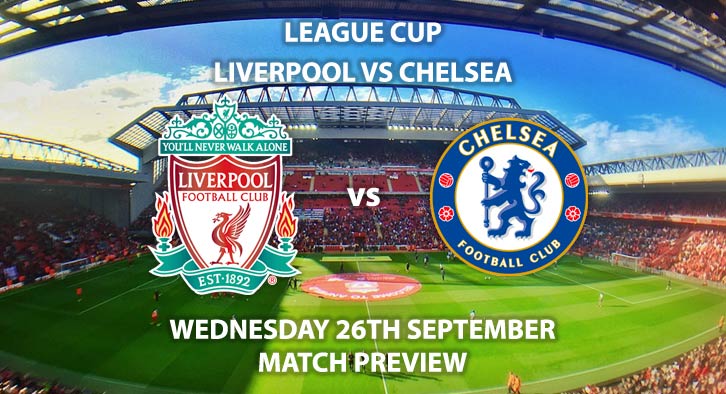 Liverpool vs Chelsea: Liverpool host Chelsea in the third round of the Carabao Cup, in the first of a doubleheader between the two sides.

Liverpool maintained their 100% start to the season with a 3-0 win over Southampton at the weekend. Jurgen Klopp rotated his side, with Xherdan Shaqiri coming into the team, alongside Mohamad Salah, Roberto Firmino and Sadio Mane. The Swiss international provided a timely reminder of Liverpool’s increased strength in depth, putting in a fantastic 45-minute performance. Operating in the number ten position, Shaqiri almost capped his performance off with a stunning free-kick which crashed against the underside of the bar. That win kept Liverpool at the top of the league, with seven wins from seven. The Reds have a tough run of fixtures coming up, with two games against Chelsea before they face Napoli and Manchester City. After this sequence of games, we may have a better idea where Klopp’s side are at, and if they can genuinely challenge both domestically and in Europe.

Chelsea surrendered their 100% start to the campaign with a 0-0 draw against West Ham on Sunday. It was a frustrating afternoon for Maurizio Sarri’s side, who created several clear-cut opportunities but couldn’t find a finish. The result leaves them third in the league table, level on points with Manchester City. Sarri has had a good start to life in London; Chelsea are performing a lot better than most expected at this early stage.

Sarri will need time to implement his new philosophy, but the signs so far have been encouraging. They still lack a world-class number nine; somebody capable of winning a game on his own, as Diego Costa could. Giroud lacks mobility, although he is a great asset to have off the bench, whilst Morata is yet to really find his feet in England. If they’re to win the title or compete in the Champions League (in future seasons), they need someone with a bit more of an edge up front.

This fixture will be much harder to gauge than the one at Stamford Bridge at the weekend. With that match in mind, both managers are likely to rotate their squads, to varying degrees of strength. As Liverpool are the home side, I think I will side with them for a narrow win, although it is really dependant on the two starting lineups.

Liverpool vs Chelsea will be televised live in the UK on Sky Sports Football with kick off at 19:45 GMT.