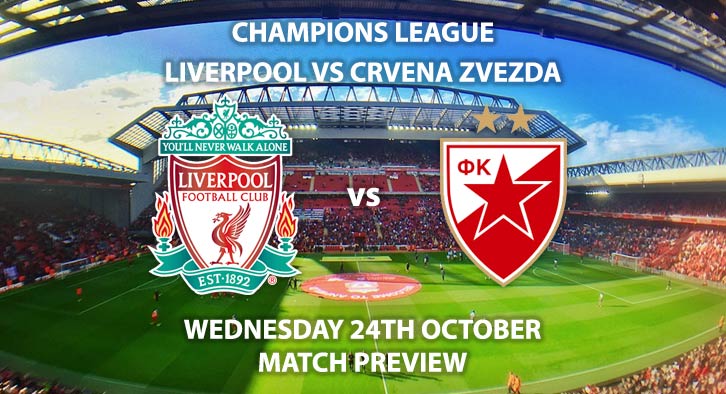 Liverpool vs Crvena Zvezda: Liverpool will be looking to bounce back from defeat again Napoli last time out and claim top spot in Group C when they take on Crvena Zvezda at Anfield.

Jurgen Klopp’s side are unbeaten since that defeat in Naples three weeks ago, having drawn with Manchester City and beaten Huddersfield since. Their win over the Terriers at the weekend was scrappy, but a hallmark of a good side; winning without playing well. The Reds remain joint top of the Premier League, level on points with Manchester City. Mohamad Salah scored the decisive goal at the weekend, as he showed signs of returning to his best form. The Egyptian scored on international duty as well, which could kick-start his season needs. Without Sadio Mane and Roberto Firimino, it was vital Salah stepped up to the plate to secure three points.

The Reds hold the joint-best defensive record in the league, having only shipped three goals in nine games. City hold an identical record, which comes as no surprise given they are the top two sides. Liverpool’s front three of Salah, Firmino and Mane are yet to reach the heights of last campaign, but there improved defensive form is what has kept them up at the top of the table. Virgil van Dijk put in another mammoth display, alongside Dejan Lovren, with Joe Gomez again at right back. They’ve had a complete transformation defensively when you compare them to 12 months ago.

Crvena Zvezda (Red Star Belgrade) sit bottom of Group C, with one point from their opening two fixtures. They currently top the Serbian SuperLiga, having taken 34 points from a possible 36 in the league. Their only defeat of the campaign came in this competition, although it was a 6-1 loss at the hands of PSG. Richmond Boakye is their main source of goals, having scored five times in the league already this campaign.

Daniel Siebert is the referee for this game. The German official plies his trade in the Bundesliga, where he has taken charge of three games this season. Across those matches, he has averaged four cards per game. As a result, I would advise a maximum of 50+ total booking points for this fixture.

Given the record of these two sides, it’s very difficult to look past a home win. Liverpool haven’t been scintillating in attack yet this season, but this game represents a good opportunity to find the net.

Liverpool vs Crvena Zvezda will be televised live in the UK on BT Sport 2 with kick-off at 20:00.

Odds and markets last updated on Wednesday 24th October 2018 @18:34 GMT. Keep checking back to see if there’s any updates to markets – the time stamp in the previous sentence for when we update tips on this page will be updated.